The first real event I covered at the just held Space City Comic Con that took place in Houston Texas this past weekend, was going to a press junket the night before the convention actually started. Was held last Thursday night, the 23rd.
As I am walking up to the room in this huge building (NGR Center) the event is being held in, a Mr. Devin Pike with Space City Comic Con walks up and greets me by saying; "You must be the classic rock guy." For I am indeed. A cool greeting. And with that the next hour or two is spent hanging out getting a feel for things. My writing skills and I'll freely admit it, are probably unorthodox at best. Even being capable of playing reporter, I simply prefer sometimes just being a fly on the wall. Which is what for the most part I did. When inspired I react. That's the important thing.

The first two people I engaged in a little small talk with was actors Gil Gerald, and Felix Silla from the late 1970's sci-fi television  program; Buck Rogers in the 25th Century. Gil stared as the title character, and Felix was the robot Twiki. The show ran for three seasons. For those whom the name Felix Silla does not sound familiar, think back to the 1960's old school television comedy classic, The Addams Family. Felix played the character known as, COUSIN ITT! So here I am. The main guy I wanted to see and talk to at the press junket, is delayed and won't be able to attend. Instead I find Cousin Itt. And I don't want to end up playing fanboy and embarrass myself before the convention even starts. Like with Gil, Felix and I make idle chatter. Inside me while this is going on, I'm thinking this is the coolest shit EVER! Those who know me realize The Addams Family is one of my all time favorite television programs. To be able to meet one of it's stars; Fuc*ing INCREDIBLE! And one of my favorite characters from the show, to boot. So it ends up Felix and Gil are both super nice guys. I would recommend going out of one's way, if at a function they are at, just to say hello. Both gentlemen are television icons. My wife made sure to tell me that Gil played in an episode of the television classic; Little House on the Prairie. One of her favorite television shows when she was a young girl.

Later on as I made my way around the three day convention, I would catch Gil and Felix at their respective tables, which of course was right next door to each other. Appeared entertaining and informative to all who approached them. One example as to what Space City Comic Con is really about. Having fun being around creative people, centering around an industry beloved by millions of people like myself. Making memories. Now home recuperating, and telling all what a blast Space City Comic Con was! Am already looking forward to the next one.

Also at the Thursday night press event was a cast member of the Star Trek Voyager television program, Manu Intiraymi. One of the actors newest projects is what I sincerely hope will be another Star Trek spin off series; Star Trek Renegades. Debuts at a screening in Los Angeles next month (August). Am hoping to review once it's available to the general public. In it, Manu reprises his character from the Voyager series; Icheb. A neonatal Borg drone freed from the hive by accident, and successfully liberated by ex-Borg, Seven of Nine. The Icheb character I thought was a pretty cool one, and in real life I found the actor who portrays the character, pretty cool as well. Walked up to me and introduced himself. Could not be any nicer. Was wearing a cool hat too. My only problem was at first recognizing him. Remember, all I know of Manu and seen of him was on the Star Trek Voyager show that ended back in the year 2001. That's fourteen years ago. People age. Others being younger than I, would have known Manu from another popular program he was in eleven years after Voyager ended called, One Tree Hill. All too eager to answer any question I threw his way. When the time was right, I asked … my ONE QUESTION. But first, how that came about.

Keep in mind, the center of attention at this years Space City Comic Con was the television show Star Trek and it's star, William Shatner. Another series of the Star Trek franchise was front and center as well; Star Trek Voyager. Starring Kate Mulgrew, as Captain Kathryn Janeway. A highly skilled actress known for more then that role but also as Galina "Red" Reznikov from the HBO hit; Orange Is The New Black. And also getting the spotlight, a Star Trek Voyager cast reunion, with several of the shows cast members attending. PLUS a shitload of other activities. On foot I found out that literally, Houston's Space City Comic Con was a HUGE event. Held right next door to Houston's iconic Astrodome. But so much more going on as well, with my point being Star Trek was certainly a big draw. Made sense to me to come up with just one question, that represented music, and was Star Trek Voyager friendly. Many associated with the program played along and the ones who didn't certainly would have if they had the time. Back to Manu (you remember him), who was the first cast member of Star Trek Voyager that I saw, so I asked him first. And without any further ado, finally … here is THE ONE QUESTION.

Using Voyagers Holodeck, if you could recreate a musical event from the past, what would it be? I then elaborated, and even gave examples. One being Woodstock because I was too young to go. Would have loved to have been there, and watched first hand what went on. Using the Holographic Environment Simulator, that would be possible.

Now for those who might now have watched Star Trek Voyager, the holodeck was used for several reasons including entertainment. One simply got creative, wrote a story, and programed that information into the holodecks computers. Within seconds, you were there.

Manu's answer: "A Sex Pistols concert." He didn't elaborate, but my guess would be the time period from their beginning years; 1975-1977. Absolutely wild back then to say the least.

I later on throughout the three day convention asked other people associated with the Star Trek Voyager program the same question. Here's their answers.

Robert Picardo: "The Beatles at The Hollywood Bowl." GREAT answer! Iconic group! Early Beatles were cool. Being in the middle of all that fan hysteria. What a rush that would be. But wait … look at Tim Russ' answer.


Tim Russ: "The Beatles Rooftop Concert" (30 January 1969). Uncle G says; "That's my answer too!" Watching The Beatles do their later material, including the song 'Get Back' in which is one of my favorite Beatles songs, would simply blow me away. Plus the roof top concert included musician Billy Preston on keys. That's worth bonus points. A few years later the honorary fifth Beatle had a huge hit with an upbeat number called; Nothing From Nothing. Born in Houston, Texas in 1946, Billy passed away in 2006, at the young age of 59.

Garrett Wang: "Elvis Presley." That surprised me. Garrett is age wise, one of the youngest in the Voyager cast that assembled in Houston this past weekend. Dude's answer is golden oldies. Got to love it! Elvis was certainly one of a kind. So an excellent response from Garrett. I'm already on record saying I'm a BIG Elvis fan as well. Have visited Graceland twice. I actually think the King of Rock n'Roll is Chuck Berry. Elvis is royalty as well.

Richard 'Rick' Sternbach (Star Trek Voyager Set Designer): "Benny Goodman." I asked for details. Just to be lucky enough to be able to attend just one show, it didn't matter which one specifically. Good enough for me. Benny Goodman back in his time, was seen and treated like a rock star is nowadays. You could really cut a rug listening to his band play.


Oh, dig this. While I was there with Rick, a real International Space Station NASA astronaut walked up and said hello to Mr. Sternbach. The guys a fan! Astronaut Douglas Wheelock. Either Rick or I could not have been any more thrilled. A real privilege / treat to be in the company of two great men such as these.

Having a Space City Comic Con Media Pass I could have waited for a break in between fans doing meet and greets, and asked Star Trek Voyager main cast members Ethan Phillips (who I'm told likes to tell dirty jokes), or Robert Beltran the question, and I'm sure both would have given terrific answers. Thing is they were very busy every time I was around them, which is fine. That's what this is in part. An opportunity for people to meet their favorite actors. Sucks through a long straw standing in them for long periods of time to do so. Basically means you're not the only individual to think he or she was a cool part of whatever entertainment project that they worked, or are presently working on.

And lastly, actress Kate Mulgrew, who was swamped with fans the whole time she was there … when walking by me, acknowledged my saying, "hello Ma'am", with a very polite "hello" back at me. Proved we both have good manners.

William Shatner the same. He walked by, and it just so happened I had his newest CD, Ponder The Mystery, in my hand. Pointing the cover in his direction, and at the closest range possible as he was walking by, I said loud enough for him to hear; "Great CD!". Check it out. Mr. Shatner took the time and said 'thank you' directly back at me. I so want to interview him about his last music CD, Ponder The Mystery. I digress. The reason why I'm mentioning that both Kate and Bill acknowledged me isn't so anyone thinks I'm cool, but instead to show how cool they are. Two of the BIGGEST stars in the Star Trek franchise, for just a second, really made my day. A complete stranger to them. No one was making them acknowledge me. First look and I'm a six foot almost 200 lbs bearded middle aged male, holding onto a big stick. Neither iconic actor was obligated to say anything in response to me. Both did anyway. Believe me, at these conventions, every second of these peoples time is taken. I'm very grateful for the acknowledgments. Hopefully someone reading this knowing them, can pass on a word of thanks. Astounding in a way, what a few seconds of politeness to another human being can do. 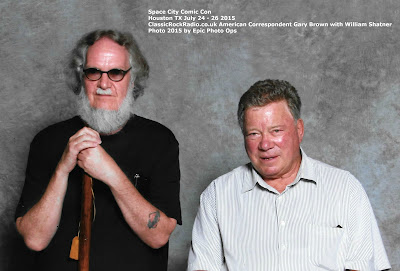 Thanks to William Shatner / Star Trek Voyager Alumni … U ALL ROCK!

George Comits who I first communicated with through email, and who helped me set up the Tim Russ interview I did recently. Mr. Devin Pike and the volunteers I met throughout my time at the Space City Comic Con … U ALL ROCK as well. GREAT job doing your assigned tasks which included making sure yours truly was okay. I sincerely appreciate it. U know who you are.