We all heard her story about her quitting the band. Then years later we were led to believe she was difficult. So much so Jackie was erased when the Hollywood movie came out about the Runaways, starring Kristen Stewart and Dakota Fanning. An original member of the band, it came across like she didn't even exist. Sweep under the rug. Now maybe we know why? 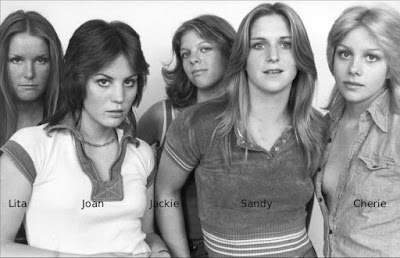 I have a hard time commenting on this current news story. Jackie's story came out via The Huffington Post last week. She NEVER came out in public before about what happened to her. Danced around it. The total scumbag who raped her after giving her several Quaaludes, was their manager, Kim Fowley. If I EVER said one good fucking word about this miserable prick, I TAKE IT BACK. Good news is Karma cleaned his clock, with the asswipe finally dying at age 75 from cancer (bladder) this past January. A common trait with rape victims so I read (researched) is for them to speak up, AFTER the one who assaulted them is DEAD. I can only assume that this is when they finally feel safe enough, to share their horrible experiences.

The details of this story are disgusting. Fowley is said to have done this, striped and had sexual intercourse with the passed out bass player, in front of others including other Runaway band members. After removing her clothing, Fowley first penetrated her with a hairbrush. Lita Ford is on record as NOT being there. Cherie Currie and Joan Jett, according to eyewitnesses STILL alive today, reportedly WAS THERE. In the same hotel room. Not screaming or protesting. Akin to watching porn on television. Cherie after viewing the vile attack reportedly said she was hungry, and wanted to go get something to eat.

It is what it is. Yes, Joan Jett and Cherie Currie were underage. Yes, we can assume they were high on booze and drugs at the time (New Years Eve). No reports of them being so wasted that their clothes were also removed, and then being sexually violated themselves. Currie, after this story was recently published, at first denied everything on her Facebook page. Then, as reported by reliable news sources, changed her story, and then posted a statement on her personal Facebook page that would make your jaw drop down to the floor after reading it. It said:

"It happened in that room. Just not the way Jackie said it happened. Different culture, different time and I never saw a band member date a man under the age of 18."

I got news for you Ms. Currie. Rape is rape! Different culture MY ASS!

The last version was as of this writing, about twelve hours ago, also on her official Facebook page. Cherie stated Jackie was an; "active participant". Easy to see where this is going. You'd think one of her Facebook friends would suggest for Ms. Currie to now STOP commenting on the situation ALL TOGETHER. Honestly, she's said enough.

Worth pointing out. An accomplice is a person who actively participates in the commission of a crime, even if they take no part in the actual criminal offense. 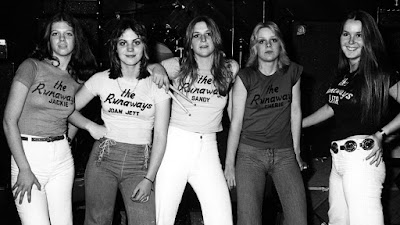 Here's the thing. The general public can and will collectively pronounce individuals guilty, and thereafter treat them as such. My guess is that without some kind of a detailed explanation, or a formal apology issued, Joan Jett and Cherie Currie will be as popular as Bill Cosby is nowadays. Along those lines, I was going to review the new album Cherie Currie has out now for this station, but then decided ... THE HELL WITH THAT!

What bothers me the MOST, and there are so many fucked up things about this, is an eyewitness account that says she recalls that Jett and Currie were sitting off to the side of the room for part of the time, snickering as the rape was going on. Add to that, Victory Tischler-Blue who was Jackie’s replacement on bass, said what she remembers most about her time with The Runaways was how some of the other members made fun of what happened to Jackie. “I heard about that nonstop,” she says now. “They would talk about Kim fucking Jackie like a dog. It was kind of a running joke.”

THE RUNAWAYS RESPOND TO CLAIMS THEY WATCHED JACKIE FUCHS BEING RAPED

Check out the original story published last week by the Huffington Post if you have NOT already. Extremely well written.

In closing, I wish I never felt a need to write something like this. I'm old enough, I knew of The Runaways when they were an active band. Got their music, and followed the solo career of several members since the band split up; Joan Jett, and Lita Ford mostly. I wish everything would somehow be OK, but I really kind of doubt it.

Oh, and HERE is a link to Cherie Currie's Official Facebook page. I can't honestly say if any and all comments that could be found on there at this very moment, will stick around for eternity. Hopefully no one sanitizes any of it. Would probably be seen as an admission of guilt, by at last some.

Dedicated to Jackie Fuchs - U ROCK!