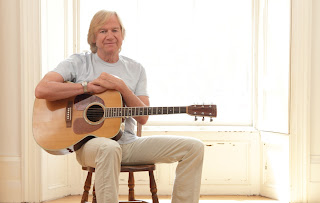 ive Nation is proud to announce that Justin Hayward, of the legendary British act The Moody Blues, will undertake an intimate twelve date solo UK tour in September 2016.  Tickets for the tour are on sale now from
www.livenation.co.uk
or
www.ticketmaster.co.uk.
VIP Packages are available which include an autographed poster, t-shirt, tote bag, pick tin set and a lapel pin.

Justin Hayward said, “'Stage Door' was the title of a song on my first album 'Songwriter' and although far from being the greatest track I ever made, it was absolutely the most joyful, with all the musicians and our families playing a part (sometimes with dialogue) in a glorious live performance directed by Peter Knight.
'Stage Door' has a particular resonance for me as when were small boys my brother and I could not afford to go to the shows at the Empire Theatre in Swindon, in fact we were regularly chased away from the lavish entrance by the fat commissionaire who stood guard there, but we loved the Stage Door - we saw many artists come and go - and we believed it was the place the real magic entered and left the building.  Which of course, it is.  It is often the one part of the building I actually see nowadays and it has fond memories of joy for me to be lucky enough to be returning, and sometimes foreboding (I think of all those gigs where I have never actually seen front of house!).

I have a friend at the Opera de Nice and the photo is taken at the 'Entree des Artistes' at the side of that grand old building.  I also realise that sadly I may be coming to the end of my touring career one day soon, and the stage door will be the place of my final step, and exit.  For our ‘Stage Door' gigs, with the sensational Mike Dawes on guitar and the gorgeous and talented Julie Ragins on everything else, I have some brand new songs to mix in, as well as old favourites. There is something there for everyone - I'm sure.”

Justin is one of the most prolific singer-songwriters in music, with songs including ‘Nights In White Satin’, ‘Tuesday Afternoon’, ‘Question’, ‘The Voice’, ‘Your Wildest Dreams’ and ‘I Know You’re Out There Somewhere’, to name just a few.  Performing and recording for nearly fifty years with The Moody Blues, during which the group has sold more than 60 million albums, he has been a driving force in the band’s success.  His most recent solo album was the well-received “Spirits of the Western Sky”.