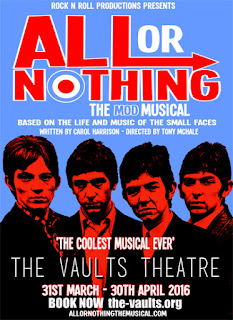 "All Or Nothing"
Extension Of  London Run Of The 'Mod Musical'


Due to phenomenal public demand, ‘All Or Nothing’, the Mod Musical, is extending its run at The Vaults Theatre, London.  The show, which opens on 31st March will now run for an extra three weeks, closing on 21 May 2016.  Tickets for all shows are on sale now.  The show was written by Carol Harrison, an award-winning actress well known for her years of theatre and TV work, and who has also been writing for the last 20 years.  ‘All Or Nothing’ is directed by BAFTA winner Tony McHale known, of course, for his body of work as a television writer and now in film.

Carol Harrison said of the extension, “I am thrilled by the reception that ‘All Or Nothing’ has found.  We offer a great night out, a fully live band and of course a moving story.  This show has been my life for the last couple of years and it means so much to me personally to have had such strong backing from the theatre-going public”.

Producer Charles Ledigo added, “We always believed that ‘All Or Nothing’was a special show and that we would find an audience.  We have been delighted that this has proved to be such a hot ticket and, of course, to be extending by the full three weeks available”.

‘All Or Nothing’ tells the exciting, poignant, and bittersweet tale of Kenney Jones, Ian McLagan, Ronnie Lane and Steve Marriott; four charismatic young kids with humour, attitude, passion and above all talent.  The Small Faces were rocketed them into the ‘big time’ only to discover the path to fantastic success is heaving with exploitation, corruption, betrayal and ultimately tragedy.

Telling this rollercoaster story of The Small Faces, ‘All Or Nothing’ features a band which plays the whole show live, and lives and breathes the music, including Chris Simmons [The Bill] as Steve Marriott.  The show truly celebrates the unique sound of the iconic Mod band.  The show is of course packed full if some of those timeless hits, including the brilliant ’Whatcha Gonna Do About It,’ ‘All or nothing,’ Tin Soldier’,’ Lazy Sunday,’ ‘Here Comes the Nice’ and ‘Itchycoo Park’.

The band’s rollercoaster journey in the music business was as vivid and colourful as their music. They created an electrifying raw sound, and an arsenal of classic hit records. It is this incendiary musical muscle and instrumental virtuosity that makes their appeal timeless. The show has already been performed to wildly appreciative audiences, with previous events featuring the likes of PP Arnold, Mollie Marriott, Chris Farlowe and Danny Dyer who said, “‘All Or Nothing’ has got it all; Drama, pathos, humour and style. Not to mention brilliant music!”

The show is sponsored by Ben Sherman, and is endorsed and supported by many of those who feature in its story.  There is also an on-site Snap Gallery exhibition, ‘Small Or Nothing’, featuring great images of the band, and avintage market. So if you are look for some rare posters or vinyl or a fabulous mod outfit this is the place to go.