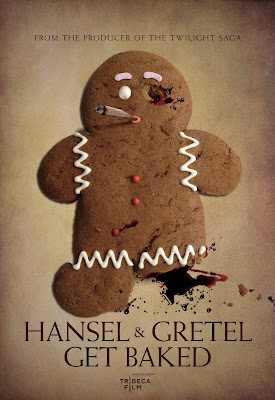 So my winter's project of catching up on movies that I heard about, but missed seeing for whatever reason, is still going strong. My recent subscription to Netflix where they are snail mailing me discs, is working out fine. Am receiving a steady flow of comedy, sci-fi, and horror flicks. I find it interesting going through Netflix's vast catalog of entertainment. Doing movie reviews for ClassicRockRadio.co.uk every blue moon, I'm always on the look out for something cool that might be FUN writing about.

One movie title that caught my eye while looking online at what Netflix had to offer, came out three years ago. Entitled;"Hansel & Gretel Get Baked." While researching I found out it was also had a second name in which it was going by called; "Black Forest: Hansel and Gretel and the 420 Witch." Both titles should I have seen either one, would have gotten my attention. The word 'baked' in one, and in the other title, those famous numbers; 420. Eureka! A pot movie!

Cannabis films come in all different sizes and shapes. The documentaries I find mostly entertaining, and informative.

Pot comedies are of course, different. Designed to entertain, and not so much educate. My experience watching them is that at least three quarters of the so called funny weed movies, are borderline unwatchable, and more stupid than humorous. Still there has been some very good ones made. The legendary comedy duo Cheech & Chong have their names on some totally cool ones. The first one they did, Up In Smoke, remaining a personal favorite of mine. 'Smiley Face' with Anna Faris ranks high with me. As do the comedy / horror Evil Bong flicks from independent film producer / director Charles Band that he's been put out. Total FUN to watch! Well, isn't that the point?

So 2013's Hansel & Gretel Get Baked (the title I like best) ends up being a horror / comedy, whereas the comedy is funny, and the horror, damn right scary. It's story traces back to the original German Hansel and Gretel story of the 1800's. Saying that, it's given a twenty first century twist. Our main characters Hansel & Gretel instead living the life of privileged teens in modern day Los Angeles California. And the WITCH, for she's a mean one. Lives in neighboring Pasadena. In this version she's a cannibal, who gains strength and a youthful appearance, by the devouring of her victims bodies, and soul.

'Hansel & Gretel Get Baked" was directed by Duane Journey, and stars Michael Welch as Hansel, and actress Molly Quinn as Gretel. From televisions Twin Peaks, Lara Flynn Boyle plays the evil witch Agnes, and superbly so. Also, in the cast, and giving a stand out performance, Bianca Saad.

Story: Witch grows super weed called Black Forest to attract, and kill those needed to keep herself alive, and young looking. She can turn people into zombies, has a dry sense of humor, and is either bisexual or a lesbian. This movie just keeps getting better and better. And without giving away TOO MUCH … it's Uncle G rating time.

Using the same one to ten star rating system from on the IMDb website, whereas one star means it's horrible and you can safely skip, to ten stars which means every stoner on the planet should enjoy it, I give 2013's comedy / horror popcorn flick, Hansel & Gretel Get Baked … 09 stars! Is well done from start to finish. For almost ninty minutes I was thoroughly entertained. One of the better pot movies I seen, fer sure. Still, I had a bit of a problem with the ending. Might have been cooler should it had been more plausible. Not that I don't wish a sequel happens.

How the hell did she survive that damn oven? That's what I want to know.