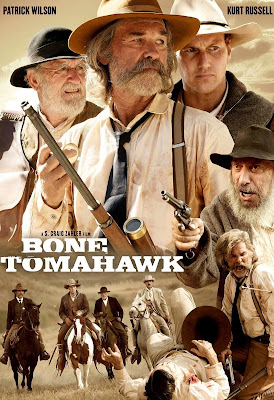 So I'm on Netflix searching for something to catch my eye when suddenly I come across a new horror / western called; Bone Tomahawk. Released only months ago, it stars Kurt Russell, who I have been watching in movies for decades now. In one of my favorite John Carpenter movies, Kurt played the role of Snake Plissken. An absolute bad ass! Bone Tomahawk also has Matthew Fox in it. An actor known for his role of Jack Shephard in the 2004 to 2010 TV series; Lost. I viewed every episode. Also found in Bone Tomahawk, minor roles by Sid Haig, David Arquette (1996 Scream), and actress Sean Young, who I know best for being in the cast of Ridley Scott's 1982's Blade Runner.

'Bone Tomahawk' is set sometime in the late 1800's / early 1900's. Was directed and written by S.Craig Zahler. Original score by the very same S.Craig Zahler that I just mentioned, along with composer / musician Jeff Herriott.

'Bone Tomahawk' was filmed in California, on a movie set just outside Los Angeles, that's been home to several westerns in the past. Shot back in October / November of 2014. Not BIG Hollywood. Stars long time actor, Kurt Russell. An indie film with absolutely no CGI whatsoever. All done 'old school'. Kurt's starting role, that of the small town of Bright Hope's sheriff, Franklin Hunt. Also starring alongside Kurt, Richard Jenkins as Backup Deputy, Chicory.

Our story starts with two male low life drifters, who go to a place they should have never had. Shit goes seriously bad, and before you know it, the good townspeople of Bright Hope is involved. I dare say what follows to be the worst thing these people have ever heard about, and or witnessed. This is where the western, turns into a horror story. Along the lines of Wes Craven's cult classic, The Hills Have Eyes (1977). From this point on, we get some real disturbing scenes. Takes time. One of the worse things I have to say about this little over two hour indie movie. Even while appreciating the extra detail, at times the picture lagged. Saying that, this is still a very well made B-film. One that as a matter of fact, should be celebrated, and given awards too. Refreshing, and thank God it's not another zombie film. Haven't we had ENOUGH of them lately? What can I say? Shit's getting old. Which makes Bone Tomahawk, a breath of fresh air. Check it out. GREAT cast! Intelligent writing! Visually believable! And believe the troglodyte clan to be either good or not, they truly are frightening. That's saying it lightly. For what's said about them at the saloon earlier in the film, is unfortunately true. These are; "cannibalistic savages." I can think of one scene where I may suggest having a barf bag nearby. You been warned!

Using the IMDb website ten star rating system, whereas one star means it should be skipped, to ten stars which means it should not be missed, and is superior among the rest, I (Uncle G) give S.Craig Zahler's Bone Tomahawk … a solid 9 stars! Again, dragged a bit here and there. Might have been a bit tighter if just under two hours? Worthy, and I believe story wise, all set up for a sequel.