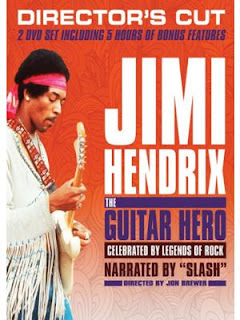 Universal Music is pleased to announce the release of Jimi Hendrix The Guitar Hero (Directors Cut) on double DVD, Blu Ray and Longform video for 7th October 2013.
Fresh from the critical and commercial success of “BB King; The Life Of Riley” and “Legends Of the Canyon”, Director/Producer Jon Brewer returns with “Jimi Hendrix The Guitar Hero” (Directors Cut). Rather than drudging up scandal and outworn hypothesis about his lifestyle and ultimate death, the film looks at Hendrix as the master of electric guitar, as told by a selection of the world’s greatest musicians in all new and exclusive interviews. Contributers include Dave Mason (Traffic) Eric Clapton, Mick Taylor, Eric Burdon (The Animals) Paul Rodgers (Bad Company) Ginger Baker (Cream) Bev Bevan (ELO) Stephen Stills (Crosby Stills & Nash), Jimi’s brother Leon Hendrix to name but a few. Some were his mentors, some his contemporaries and admirers of his incredible talent, and those who emerged as new talent as a result of his influence. All happy to come forward and explain why Hendrix’s work remains at the zenith of rock music to this day.
Moving beyond the icon and the myth, this DVD brings alive the images and music that Jimi Hendrix evoked from his very soul, using the instrument as, he put it, his “personal diary” This style evoked  a home-grown and raw, uncensored sensuality, which indeed was his nature and that of his music, as if he were his own muse.
Narrated by Slash (Guns N Roses/Velvet Revolver) a longtime Hendrix acolyte, this film is less a biography than the first film ever to focus on the music itself and the impetus of the master who created it.
In addition to the standard film, the Directors Cut features the following exclusive content
Previously unreleased archive footage
Henry Diltz’s 8mm silent footage of The Monkees 1967 tour
Full performance of “Hey You” by The Experience at The Marquee in London
Extended interviews with Slash, Mick Taylor, Micky Dolenz, Leon Hendrix, Joey Covington, Stephen Stills, Lemmy Kilmister and Dave Mason
Photographs and memorabilia
Bonus disc containing over 5 hours of never before seen extended interviews
Posted by Jon Kirkman at 13:40