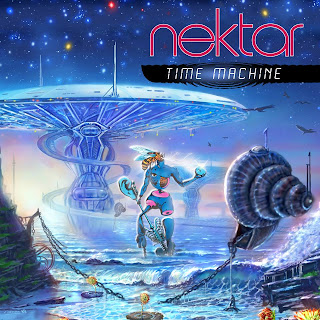 "By far the best album we ever made" - Roye Albrighton

Those who know my personal taste for music are aware that I have always been a fan of Nektar. Not a fanatic to where I have every official release, or collect all the rarities, but a fan nonetheless. In the year 1973, they released an album that caught my attention called Nektar - Remember The Future . Didn't take long for word to get around about how fine an album it was. The recording has been in my collection of music ever since. For various reasons I concluded it was one of progressive rock's finest offerings. A concept recording. One thirty five minute song with two parts. Wrapped in far out / eye catching artwork. A perfect combination of eye candy, words, and music. In my humble opinion, some of progressive rocks / metal prog rocks crowning achievements are concept recordings. May I present exhibit A to the jury?

(Note: Purple Pyramid just released an 40th Anniversary edition to Nektar - Remember The Future that is worth seeking out. Out a few months now. I gave it a five star review. Comes with a bonus disc. Available at fine retail establishments and/or wherever good music is sold.)

Now there are those of you who are reading this and wondering to themselves about how long Nektar's been around. My giving details about what was Nektar's fourth release gave a clue that the band has been around at least since 1973. That's forty years ago right there. They've been around a lot longer, as a matter of fact, since 1969. The band is out of Germany, with members being from the UK. Back in the day these guys were so art rock (pre-modern day prog) that they give credit for lights, special effects and other miscellanea, in the band's line-up. Like a musician, and performing for the mind is a Mister Mick Brockett. He's credited on Nektar's official website for Liquid - Static - Film projection (from 1970-78 / 2002 .......). How often do you see that? An over all real commitment to the arts with the focus on words, sight, and sound. I would have LOVED to have been able to witness this back in the day. While doing LSD (just kidding). Nektar, in the beginning, was considered a psychedelic band. Music created to punctuate a high. Filming the band in concert was always considered hard to do at best, because of the light show. Very cool visuals meant to stimulate the concert goers brain. For the consumer worth every dollar. A shame we don't have stacks of DVD's visually archiving Nektar's past, but at least the stories are there to help preserve Nektar's past.

Time Machine is Nektar in the twenty-first century. A solid mainstream prog-rock band. As solid as Yes or any of the other competition that might be still around after all these years, if not better.

Speaking of Yes, this CD, in parts, does remind me of them a bit. More the Trevor Rabin era of 90125 (1983). At the time a reincarnation of a departed band. Alive again by chance and fate. All the puzzle pieces fit perfectly. With Trevor Rabin and the return of Tony Kaye, Yes was a new band. I categorize Nektar's Time Machine in at least the same ballpark as the most popular selling Yes album. A relaunching of a classic rock band that is worth the time investigating. Better comparing 90125 to a Yes release that would come years later; Yes - Open Your Eyes (1997). My least favorite of all the Yes studio releases, including Union (1991). Been a Yes fan longer then Nektar. One key element connects Yes' Open Your Eyes to Nektar's Time Machine. His name is Billy Sherwood. Some might say a hired gun nowadays. The man has a very impressive back catalog of music. Just so happens Billy's produced one of my favorite Paul Rodgers CD's called Muddy Waters Blues (1993).

In the two decades past, Sherwood has certainly learned his way around a recording studio. Matter of fact, he engineered and helped Roye Albrighton mix Time Machine. Appears on the album as well playing a wonderful bass throughout the disc. Outstanding guest appearance here. I always thought Yes' Open Your Eyes would have made a great EP CD, while losing half the material. Oh well...for those unaware OYE contains a cool hidden track Sherwood was behind. The rushed studio album may suck in parts but it's still worth purchasing.

Nektar's Time Machine -- The Music
The first track is a song called "A Better Way". Interesting intro to the CD with keyboards, effects, and spoken word. ProgHeads eat this shit up. And admitting I don't understand it completely, I think it's cool the band's fascination with the subject of 'time' in this and past albums. Gives it a science fiction feel. The lyrics, real poetry, able to stand up to any coffee house e-cig smoke filled room with just a vocal reading, and maybe some bongos in the background. The music, in parts resurrecting a sound that reminded me in parts of a prog band from long ago; Starcastle. 'A Better Way' also includes some solid hard rock moments. Presented in classic progressive music style, and clocking in at just over nine minutes. Being in the music business means paying attention at least a little to today's music scene. Time Machine should interest the youngsters since it's consistent with modern rock / mainstream prog bands of today, and also keep the older fans who will find moments of Nektar's past alive and well on this new CD.


The second track tells a story; "Set Me Free, Amigo" has a Jamaican / reggae sound to it. All about dreams. Towards the end we get this very cool fast paced instrumental piece. Sherwood's bass is on fire. Repeat chorus and out you go. Progressive rock does not have the boundaries a regular four or 5 minute rock / pop tune has. Musicians can exceed and go beyond their usual repertoire. Explore other sounds and rhythms. Nice job on this one.

"Destiny": I can see the creepy dry ice at the end of this one.

"If Only I Could": This has a cool Yes vibe. Outstanding main / background vocals. Musicians here all display exemplary talents. The songs is nicely paced. Mainstream prog rock / hard rock tune. Smokin' instrumental moments. Billy Sherwood again rules with his Chris Squire sounding bass work. The end of the song almost sounds like an end to a World Trade song. Which is a good thing. I dug that band. Back to "If Only I Could"...one word; invigorating.
"
Time Machine": The official video of this song by the band is a good one. I've given it repeated plays. Visually stunning. Music wise, groovy vocal and guitar performance by original member Roye Albrighton. Most of the material on this new studio release is written by him. Ron Howden, a drummer who can't be any more under-rated and more unknown then Rick Wakeman's, Tony Fernandez. Yet these guys are some of the best drummers in professional music. Who are these guys of thunder? Like Charlie Watts, providing a steady and consistent beat for decades. The second of two original Nektar members left in the group. Howden provides a solid foundation here on the title track as well on everything else. Also worth pointing out is that at around the five minute mark, keyboardist Klaus Henatsch just takes off. Such a pleasure to hear a seasoned pro like this. Nice bass work provided by Billy Sherwood. Cool ass video...Google it.

Time flies as the rest of the CD plays out. The song "Tranquility" has a great intro / outro to it. Next is track seven and a tune called, "Mocking The Moon". Contains a cheery vibe, with a tempo and sound that reminds me of Asia, back when John Payne was with them. A solid song and must be noted that it wasn't written by Roye, but instead Barbel Craven and keyboardist Klaus Henatsch. And it just so happens that the next track on Time Machine is a song called "Talk To Me" written by drummer Ron Howden. Everything else on Time Machine is credited to Roye. Good work by all involved, in front and behind the scenes.

An Uncle G favorite is the second to last offering called "Diamond Eyes". An instrumental with a very jazz fusion feel to it. The whole band just gels on this. I gave this a repeat play immediately after hearing it for a first time. Keyboardist Klaus Henatsch sounds very Bob James in parts. A brilliant jazz keyboardist prog-rock fans in general would all dig if introduced to his recordings. Is best known for the 1970's TV theme song to Taxi called "Angela" (Bob James - Touchdown - released in 1978). Song is another showcase for drummer Ron Howden, and also Mr. Sherwood whose yet again on his game.
"Diamond Eyes" makes for a nice closing track.

With my minds eye, I acknowledge a consistent thread here running right down the middle of this review. Nothing wrong or any disrespect to any other Nektar bass player past or present, but I'd love to see a DVD of the band with Mr Sherwood on bass pounding out this new material. Hopefully more then just myself thinks that's a good idea. Reading this Cleo? Here's an idea for the title to the proposed follow up 2 CD / DVD; Nektar - Live in Space City (Houston Texas) - with special guest Billy Sherwood.

Rating: Using the one to five star rating system, I rate Nektar - Time Machine FIVE STARS!! I like the fresh sounding approach. Still containing its retro moments. Enough to keep me satisfied.