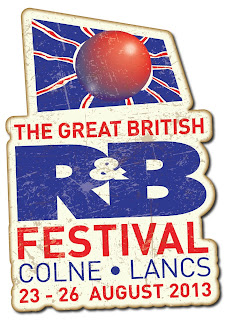 With more than 600 artistes performing at nine official venues over four days, Colne’s annual Great British Rhythm and Blues Festival is now as the key UK rhythm & blues festival on the UK calendar , held over the Bank Holiday weekend.
Following last year’s resounding success, there will be another afternoon of Jazz on the Sunday

British harmonica ace Giles Robson has scheduled Saturday evening’s events and is presenting the Colne Harp Explosion, featuring three of the biggest three harmonica legends in music - Charlie Musselwhite, Sugar Blue and Billy Branch – and will be jamming with them all throughout the night. Other International Stage highlights this year come in the form of  Lil’ Jimmy Reed, Steve Phillips & The Rough Diamonds, Paul Lamb &The King Snakes, The Swing Commanders, The Jive Aces, Ian Siegal, King King and the Chas Hodges Band. Climax Blues Band return, as well as Chris Farlowe& The Norman Beaker Band, the ever-reliable Nine Below Zero, Dr Feelgood and The Pretty Things are back to stun the Muni audience once again.

The remarkable and indomitable spirit that continues to drive Wilko Johnson has allowed him and his band to be added to Monday’s line-up: “'It seems that I am still being spared the final onslaught of my terminal cancer. As the memory of the Farewell Tour recedes I am feeling again the desire to get up on stage and do my thing while health allows - so it is that I have decided to make some festival appearances during the summer”

British Stage highlights include the sensational hit of TV’s Andrew Marr Show – Blues Boy Dan Owen (now under the wing of Mick Fleetwood and soon to tour with ZZ Top), Krissy Matthews and Cliff Stocker’s Slack Alice, who are guaranteed to ram the leisure centre. Look out too, for The Revolutionaires, the Maz Mitrenko Band and Midnight Train with Sam Kelly & Debbie Giles.

The Acoustic Stage continues its reputation for ‘you should’ve been there’ performances, with Deborah Bonham returning after her barnstorming International Stage performance in 2009 and fresh from recent appearances with Steve Cropper and Paul Rodgers;  Krissy Matthews provides a chance to see him in a more intimate environment, with other performances coming from Gypsy Bill Williams & Del Potter; Dale Storr, Mike Sweeney & Paddy O’Hare and Babajak .

And thats all apart from the 7 official roadhouses.!

The Jessica Foxley Stage returns again, giving young, local musicians a rare opportunity to perform in front of the hundreds of fans on the British Stage through the four day event.

And The Great British Rhythm and Blues Festival will this year play host to the British Blues Awards, hopefully bringing even more people to the event.

The British Blues Awards recognises the best of Blues music, musicians and festivals in 15 different categories, including British Male and Female Vocalist, British Blues Band, British Instrumentalist and British Young Artist. The awards will be presented on the British Stage on the Sunday afternoon.

BBC Radio Lancashire will once again be broadcasting live from the British Stage at various times over the weekend.

Festival organiser, Alison Goode, said: “The Festival is now in its 24th year and continues to pull in the crowds, which is a fantastic achievement. We look forward to welcoming back loyal supporters who return year after year to enjoy four whole days of live music, as well as those visiting for the first time.

“Every year we try to cater for all musical tastes and again, we are really excited by the line-up we have already secured.

“Also for 2013, we are proud to be hosting the British Blues Awards, which will hopefully bring more – and new - people to the Festival.

“And let’s hope 13 will be a lucky number for us and we get some good weather to add to the terrific line-up and create the fantastic buzz and atmosphere this Festival is known for.”

For a full line-up, to find out more and to buy tickets, visit the official website

www.bluesfestival.co.uk.
Posted by Jon Kirkman at 11:37