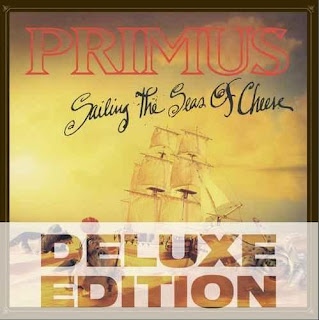 There was a time when Primus were flavour of the month and very highly rated not only by musicians but also a rather large fan base. Of course Primus still command that admiration but now over twenty years on it is time to look back.

Whilst managing to break out of the large cult they had built up very quickly I think  it was with this album that Primus made the leap to the mainstream rock audience and the then new Alt Rock scene. Primus were an excellent band led by bassist Les Claypool who was an extraordinarily talented bassist both melodically and technically although the other members guitarist Larry LaLonde and drummer Tim Alexander make a huge contribution and together all three lock into a frighteningly tight combo .

Sailing The Seas of Cheese was the bands third album but their first for a major label. The singles Tommy The Cat and Jerry Was A Race Car Driver were both on high rotation on MTV on release and served the band well both in terms of recognition and as a good example of what they were capable of. It was round this period that many fans of the band Rush seemed to latch onto the band I personally know many Rush fans who rave about the band and musically there is much to enjoy here and this is no doubt in part due to the fact that the band supported Rush during their Roll The Bones Tour just prior to the release of this album.

This Deluxe edition has been personally remixed by Les Claypool and with the second disc you now get an excellent 5.1 remix plus a couple of bonus live cuts and a remix of Here Come The Bastards.
When Sailing The Seas of Cheese came out in 1992 the band were like a breath of fresh air and indeed as a going concern they still are and the following year the band saw this album attain Gold status. It has subsequently gone platinum so I think it is fair to say that Primus are no longer a cult band. This was no doubt brought about by the success of this album and also the fact that the band was savvy enough to accept an offer to play and headline the Lollapalooza Festival in 1993. They also played at the 25th anniversary Woodstock Festival in 1994.

Primus to some are perhaps an acquired taste but if I were to suggest anyone getting into the band then this is the album I would definitely recommend. The band as I say are still a going concern led by Claypool although they did take a break for three years between 2000 and 2003.


Favourite tracks?
Well always Tommy The Cat and Jerry Was A Racing Car Driver but I also love Fish On and American Life. The remixes here are also great and take nothing away from the original mix so Les Claypool is obviously very aware of not tampering with history but sonically this album is a must have for fans and newcomers alike he has done an excellent job of tweaking the tracks without over polishing them. A timely reminder from the early days of Alt Rock but to be fair while many Alt Rock acts now sound dated this album and Primus sound remarkably fresh which makes this Deluxe Edition of Sailing The Seas Of Cheese a must have album
Posted by Jon Kirkman at 11:21