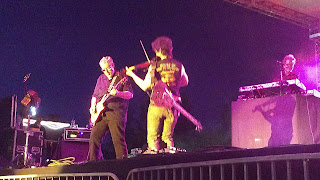 July 18th was a perfect warm summer day to take a 181 mile trip to Albany, OR from Tumwater, WA to see Kansas and celebrate 40 years of one of the best Prog bands around!  "Man the Stormcellars: Kansas is Koming!"

We took our seats in the first row and looking around the stage, to the left was Richard Williams and Steve Walsh quietly setting up their equipment!  I was thinking, should I bother them for an autograph?  Then the guy sitting next to me showed his autographed picture that he bought at the fair.  I decided to look into that option later since the show was just about to start.

Ladies and Gentlemen KANSAS! Richard, Steve, Billy, Phil, and David.   Steve Walsh kicks up his organ for the opening song, "I Can Fly."  Goosebumps right away!  I was ecstatic at that moment to be there watching one of my favorite bands live.  Steve's voice was incredible as he goes into, "Paradox." They went on to play, "Point Of No Return" "Song For America" which really showcased Phil Ehart's talents on the drums. We really couldn't see much of him sitting low behind his set, we sure could hear him though.  When they started "The Wall" well....I am beyond words, what an incredible song.  Richard Williams guitar work and solo was superb. They went on to play, "Hold On" and "Dust In The Wind" I was thrilled they were playing these timeless masterpieces! 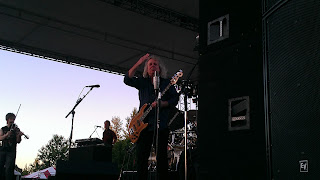 Billy Greer was standing up there on the stage, a warm breeze blowing through his hair as he introduced the band. He made us laugh, sticking his tongue out for a very cute 5yr girl with a camera taking his picture. She took a liking to him after he handed her a guitar pick.  He told us, "Last time we were here it was raining, but what a beautiful day to be here in Albany."  We are going to take you way back to the beginning now."  "Belexes" and "Can I Tell You" from there 1974 Debut album. "Icarus ~ Bourne On Wings Of Steel." "Miracles Out Of Nowhere," and "Portrait (He Knew)." With that they left the stage and left us screaming for more! They came back to play "Fight Fire With Fire," and "Carry On Wayward Son."  What an Incredilbe
set! 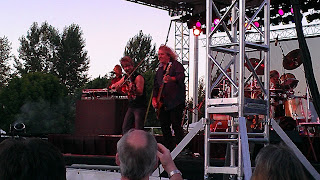 The energy on stage was awesome, David Ragsdale had great showmanship, teaming up with the other players during solos playing the hell out of his violin! Not a moment went by that I didn't think of all the other great players of Kansas throughout the years, Kerry Livgren, Robby Steinhardt, Dave Hope, and John Elefante.  Will I travel to see them again? Just tell me where and when and I'm there!  Thank you Kansas for 40 years! 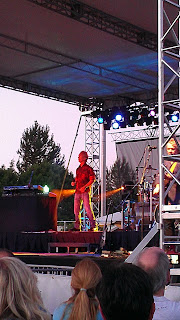 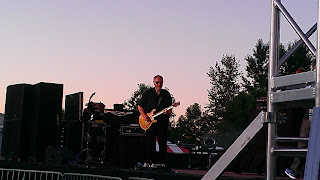