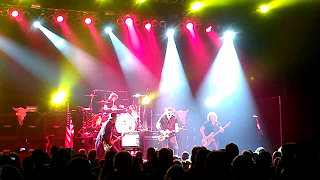 Jill Maciel recently went to the Ted Nugent concert at the Emerald Green casino in Tacoma WA.and she kindly wrote this review of the gig. All content and photographs Jill Maciel/Classic Rock radio.eu 2013

I just got back from seeing the very talented and controversial Ted Nugent.  Ok, we all know that he is a bit like Yosemite Sam, a grouchy rebellious cowboy with a hair trigger temper and a severe hatred for rabbits.  I take that back, I'm sure he loves rabbit.  Anyway you can't deny his talents.   Ted is a rocker, an avid hunter, a gun rights activist, a writer, a TV star, an NRA spokesman and a radio talk-show host. He thanked the crowd for making his hunting show, "Spirit Of The Wild"  the number one hunting show in the history of the world and in return he asked the crowd to thank "Uncle Ted" for his music and keeping the government on their toes.  He reminded us to be strong in what we believe.  Ted also said between songs that he kills so many animals that he can't possibly eat everything he kills so he sends a ton of venison meat to our American troops every year.  There's nothing like eating Ted's meat!

The stage was set in a native American theme with glowing red eyed Bison skulls sitting on top of the amps.  Everyone waiting as the Rolling Stones blared from the speakers, then the music was cut, the lights went off and Ted, in the darkness, starts wailing on his Byrdland Gibson Hollow body opening up with "Gonzo."  The lights go on and you can't help but feel the intense energy that is filling the room!  Ted kept calling on the "Spirit" asking us to feel the spirit and to feel the love. That was "Just What The Doctor Ordered" which was the next song. He went on to play "Turn It Up" "Free For All" and "Stormtroopin."  Ted did a lot of talking between each song sharing his beliefs and being funny, constantly engaging the crowd and keeping the spirit and energy flowing.  He reminded us to remember where music came from thanking Robert Johnson,  Bo Diddley, Muddy Waters, Howlin' Wolf, Chuck Berry, Little Richard, and James Brown among others as there were so many mentioned as he went into "Wang Dang Sweet Pootang."  In the middle of Wang Dang Sweet Pootang he slowed down and cut into Led Zeppelins, "Since I've Been Loving You" and "Cool Jerk" written by Donald Starball.  "Lets hear it for dead shit on the grill" as he goes into "Live It Up" and "Queen Of The Forest."  The bass player, Greg Smith sang the next song "Need You Bad" he is not only a great bass player, but he has an excellent voice. 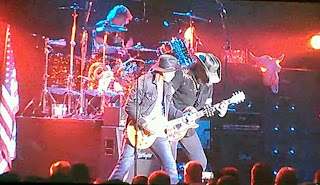 "Fred Bear" was the next song and Ted talked about his grandfather and father and about the life lessons they taught him.  Teaching him to live off of the land and hunt for his food.  Teaching him the spirit of the wild. Telling his grandfather Fred Bear that he can hear him, repeating "I can hear you" as he went into the song.  Next up, Derek St. Holmes with "Hey Baby" which was dedicated to all the ladies of the great Northwest, Oh Yeah!  Derek's voice is better than ever!  Last two songs were the crowd pleasers with "Cat Scratch Fever" and  "Stranglehold."  I've been to a few concerts this year so far, and I have never seen a crowd go more crazy than they did over dear Ole Uncle Ted's last two classics.  That was it, the end of the concert and he left us screaming for more!  Ted obliged and came out for the encore "Great White Buffalo" which he ended in some riffs off of the Star Spangle Banner. 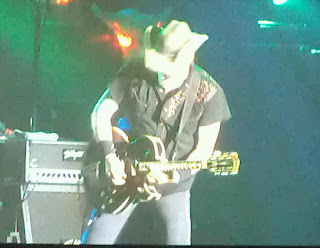 I read somewhere that Ted Nugents talents don't flow from his mouth, but from his fingers and I have to disagree.  He may not be the greatest singer, but he can definitely talk a crowd into frenzy, good or bad and we all know he's a hell of great guitar player, so to quote Ted Nugent, "If you don't like me ..... fuck off!" 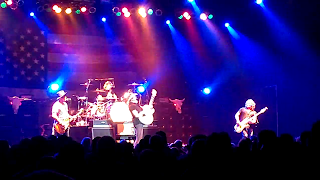