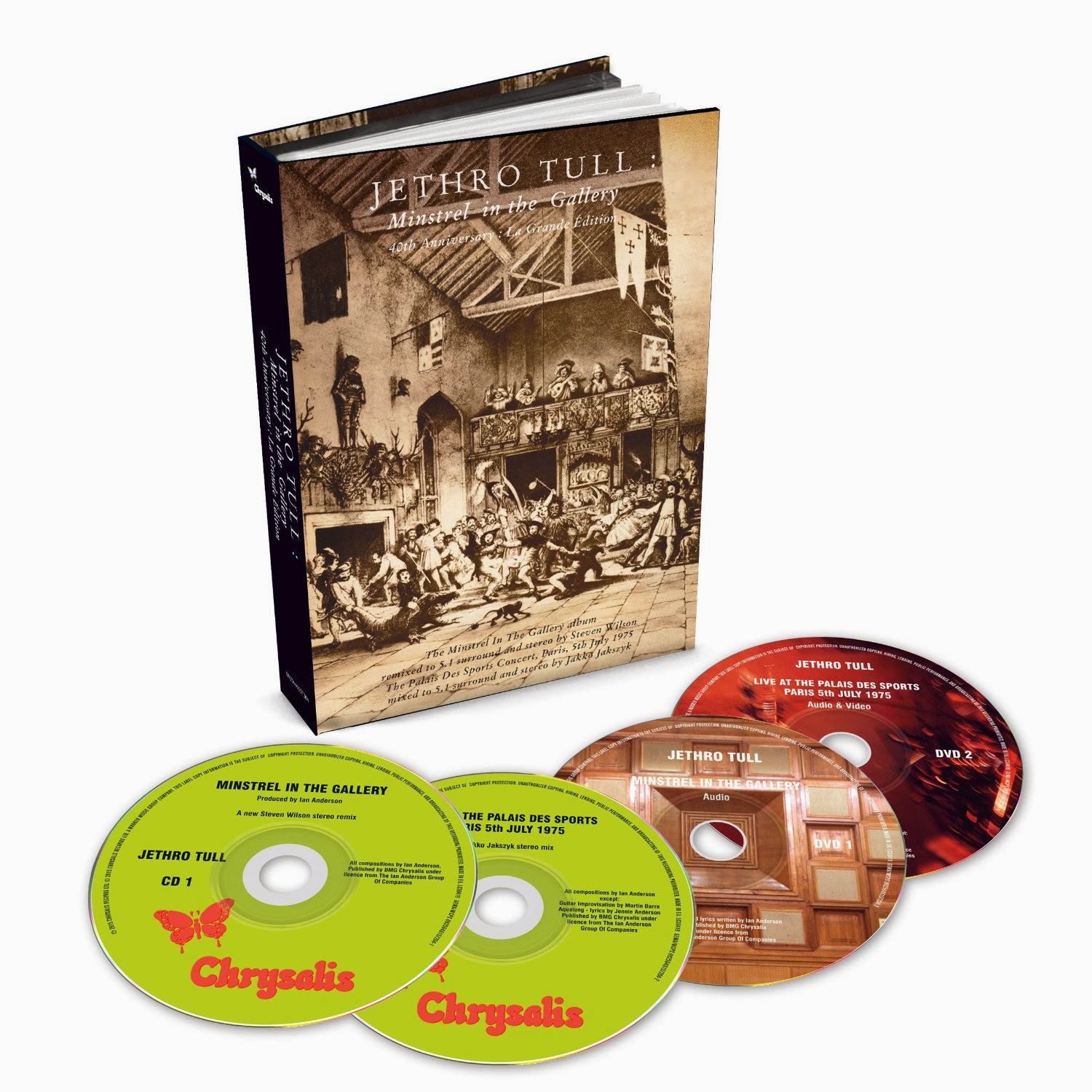 Multiple Versions Will Be Available On May 4th From Parlophone

Jethro Tull notched its sixth gold record in 1975 with its eighth studio album, Minstrel In The Gallery. Its elaborate production is reminiscent of the band’s 1972 classic Thick As a Brick and its songs rock as hard as anything in the band’s vast and storied catalog . To mark the occasion of the album’s 40-year anniversary, Parlophone will present several new versions of the record.

MINSTREL IN THE GALLERY: 40TH ANNIVERSARY LA GRANDÉ EDITION will be available as a limited edition 2CD/2DVD set on May 4th.

Highlights from the set include:
-          Original album and seven bonus tracks (six previously unreleased), two mixed to 5.1 surround , and all to stereo by Steven Wilson
-          Flat transfers of the original LP mix at 96/24+ Summerday Sands
-       Flat transfer of the original quad mix of the LP + Summerday Sands
-          An eight and a half minute film of the band performing “Minstrel In The Gallery” in Paris from July 1975
-          Presented in a case-bound DVD book that includes an 80-page booklet featuring an extensive history of the album, track-by-track annotations by Ian Anderson,recollections by roadie Kenny Wylie, Maison Rouge maintenance engineer Pete Smith, and string section member Liz Edwards plus lyrics, tour itinerary and rare and unseen photographs.

Additionally on May 4th a new stereo remix of Minstrel In The Gallery will also be released on a single CD, digitally, and on 180-gram vinyl as a limited edition pressing.

When it was originally released, Minstrel In The Gallery became the band’s fifth consecutive US Top 10 album, peaking at #7 and #20 in the UK. It was also the last to feature the longtime lineup of Ian Anderson, Martin Barre, John Evan, Barriemore Barlow and Jeffrey Hammond-Hammond.

For this anniversary edition, the album has been expanded with the b-side “Summerday Sands,” several studio outtakes, as well as alternate session material  done for a BBC broadcast,  of the album’s title track, “Cold Wind To Valhalla,” and “Aqualung.” The second disc features a live recording of the band performing at the Olympia in Paris on July 5, 1975, a few months prior to the release of Minstrel In The Gallery. During the show, the band played songs from several of its albums, including War Child (1974) and Aqualung (1971), as well as an early performance of “Minstrel In The Gallery.” It was mixed to 5.1 & stereo by by King Crimson guitarist Jakko Jakszyk.