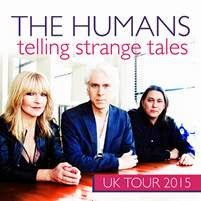 The Humans’ third album ‘Strange Tales, recorded in Pearl Jam’s studio, is available digitally now and will be available exclusively on CD at the six UK tour dates.

The band is the brainchild of renowned singer, actress and household name Toyah Willcox and brings together three lifetimes of musical experience, experimentation and craftsmanship.

TOYAH needs little introduction having been a household name since the early 80s with platinum selling-albums, a string of top 40 UK hit singles and scores of prestigious screen and stage roles alongside Katharine Hepburn and Laurence Olivier.

BILL RIEFLIN is a respected and acclaimed figure from the US music scene and was the live drummer for REM for over ten years. Most recently he played drums on the ROBBIE WILLIAMS album TAKE THE CROWN and the no1 hit single CANDY.  Bill Rieflin recently completed a series of live US concert dates as a member of the legendary rock band KING CRIMSON which he is now a permanent member of.
CHRIS WONG is a Cambridge-born musician and a professional guitarist, bass guitarist, arranger, orchestrator, composer and musical director. Alongside band work Chris musically directs extensively in musical theatre. His debut solo album The Edible Suite reflects his interest in jazz/funk/rock.

TELLING STRANGE TALES will kick off on 11 April 2015 at Trading Boundaries, Uckfield and close at The Britannia Theatre, Chatham on 19 April. It will also include the first London gig by The Humans since the 4-star reviewed (Financial Times) gig in 2011. Most notably this London club date is at the 100 Club, Oxford Street which Toyah last played some 36 years ago as an unsigned emerging music act.

“The Humans have made that record we might have gotten if Tori Amos and Trent Reznor had ever come together for a full album in the late-nineties.”
“It’s the musical equivalent of a drive through a part of town you’ve never seen, and just when you think you’ve got the area figured out, you pass a sign welcoming you to the nearby town with restaurants of a different vibe, and even the sky looks a bit different. But don’t consider driving back now, because you’re on a one-way and the scenery stays intriguing.”

They will be aided and abetted in these live concerts by returning live guest human Igor Abuladze and for this tour by Tim Rose. Alongside Wong, Tim Rose has played in Toyah’s live touring band since 2005. The tour will see the first UK live performances of material from 2014’s Strange Tales album which was met with much praise from fans old and new. ‘Get In Your Car’ and ‘Amnesia’ have already become firm favourites.

BIOGRAPHY:
THE HUMANS were formed in 2007 after Toyah was invited by the Estonian ambassador to tour Estonia. Highly experimental, the band reflects the distinctly different musical backgrounds and life experiences of its members. Before they had ever set foot into a recording studio, The Humans premiered their material in 2008 with a sell-out series of concerts in Estonia attended by the Estonian president. Their debut album was mastered by Simon Heyworth (Tubular Bells, Brian Eno). It was released in May 2009 to coincide with the band’s return to Estonia to headline at ‘Tartufest’.