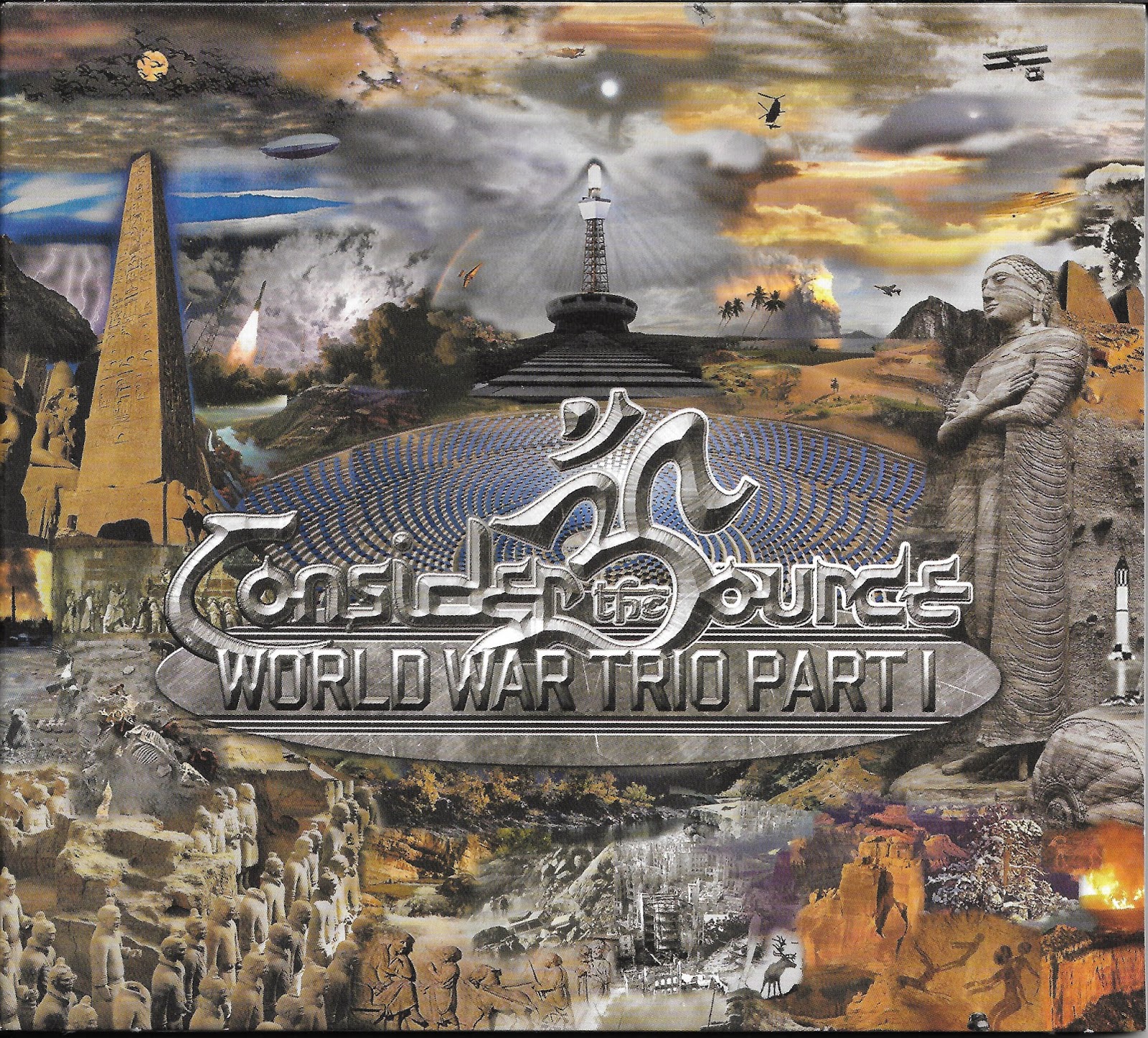 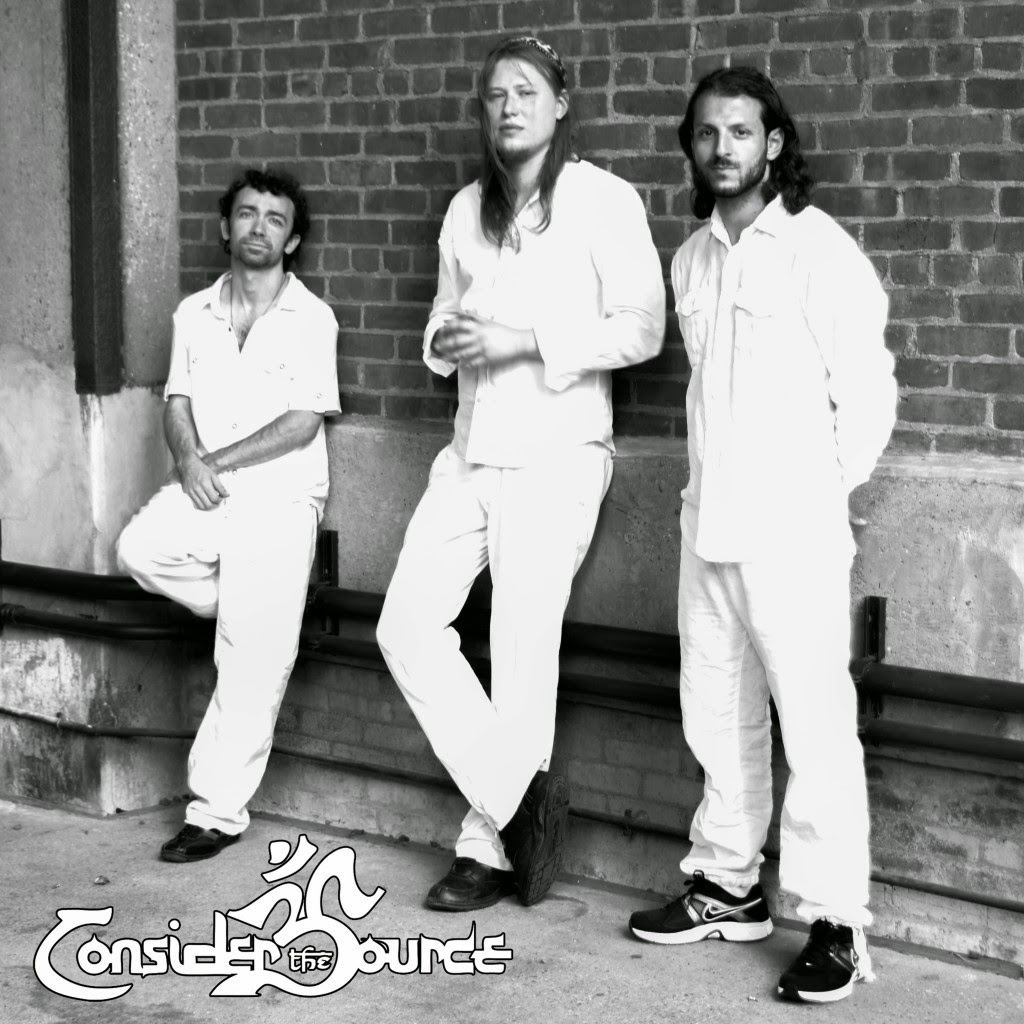 So if one asked me how I mostly spent this past March, I'd say besides listening to classicrockradio.co.uk, that I seemed to have totally engulf myself in the new EP CD by a band called Consider The Source. This EP CD is called; World War Trio Part 1. A 23:31 minute instrumental entitled 'Put Another Rock In That Bag' starts and finishes the music disc. Having played well over twenty times, it still impresses the shit out of me, each and every time I hear it. Hard to do when taken into consideration, that I have submerged myself in GREAT music since the 1960's.

"NO keyboards were used in the making of this album"

I remember Queen using that line or something akin, decades ago. All eyes and ears on the guitarist now. No problem, for original band member, Consider The Sources, Gabriel Marin, got this in his sleep. My research tells me this young man, lives and breathes the guitar. The vibes I get when listening told me he's a passionate player, for he and the guitar sound as one. Like he's inside the guitar, or the guitar is inside him.

Add a bass / drum team capable of not only keeping up, but adding their own unique textures as well. On drums we have Consider The Source's newest member; Jeff Mann. His percussion skills make his not just the drummer in a three man band, but one who cements all that is going around him. Add my new favorite bass player; John Ferrara. Been playing since age thirteen. I can't believe no one has mentioned this dude to me before now. Especially knowing how much I dig really good bass players; Tony Levin (King Crimson_Peter Gabriel_Levin Brothers) / John Entwistle (original member of The Who; deceased) / Dennis Dunaway (original Alice Cooper). Just to name a few. I actually have a LONG list of bass players I really dig. These players in my mind not only blend in when it's appropriate, but otherwise STAND OUT when the time comes. John Ferrara is one of the best bass slap players I come across in a while. Like the other two members of 'Consider The Source' that I previously mentioned, serious about what he does. On internet videos I've seen, he appears to be a stand out, entertaining performer. Same said for the band as a whole. I'm skipping ahead of myself now.

"We ask that when you listen to this album, please do so in an undistracted environment, preferably in headphones or high quality speakers. We tried to capture unique emotions that cannot fully come across while listening on laptop speakers."

When I open a brand new music CD, and find these words written, it makes my inner prog-rock child smile (insert favorite smiley face image here). What helps 'Consider The Source' here the most, meaning even more than their superior knowledge and skill displayed while playing their musical instruments, is what's being played. A poorly written number done by brilliant musicians, is normally still, a poorly done song. Not the case here. This effort bought and paid for by the generous donations of fans via a successful internet 'Indiegogo' campaign. Pros and Cons of asking the public for financing, as everyone, including myself have an opinion. Another fish to fry on another day. In this case, I'm glad all worked out. For this being my introduction to the Sci-Fi, Middle Eastern, Fusion, progressive rock, Funk, progressive metal, Psychedelic group that is Consider The Source, could not have turned out any better. 'World War One Trio EP Part 1, made in Brooklyn New York. The almost twenty four minute's worth of music, is simply outstanding. To say this recording blew me away, would be an understatement.

Here's what happened to me to those individuals I said two weeks ago that I was reviewing the new Consider The Source EP CD. I FELL INTO IT. From the opening notes, to it's finish. So much so that when I researched the band as I usually do before writing a review, I started becoming a fan.

I broke the CD in while driving into Houston, Texas one early Saturday morning while in the middle of a downpour that made driving almost impossible. My silver lining was hearing these sounds fill up the car while I tried to not get myself killed. Get this, the CD starts playing, I'm not hearing any singer. Two minutes go by. Five minutes go by. I hear temp / style chances. Similar to a classical piece written hundreds of years ago, where a song is made of different parts. Musicians with classical training were composing / helping to compose material doing what they were taught, but being more stylist about it. Back in my day someone like Deep Purple's Jon Lord (R.I.P.). And then the self taught musicians (Steve Howe of Yes) researching song composition are usually sooner or later steered the way of Beethoven, and others considered to be a part of the Master composers. Not only to help them play better, but write better as well. One lesson learned along the way is that a four bar intro is a four bar intro, be it classical or classic rock. Other similarities as well.

Rating: Using the one to five star rating system, in which one star means it sucks through a long straw, to five stars in which means it's cool to spend your hard earned money on, Uncle G gives Consider The Source - World War One Trio Part 1 …FIVE STARS! All day long. To perform a song lasting over twenty minutes that's capable of keeping people whose taste in music varies, all focused and grooving as one, impresses me to the max. This is a rocker! Has it's melodic moments. Sounds structured and improvised. The song entitled 'Put Another Rock In That Bag' sounding ALIVE and VIBRANT! Capable of shooting a band like 'Consider The Source', up a notch on the popularity poll. And mark my words, it will. Executed brilliantly behind the scenes! Has a smooth sound that the ears seem able to handle throughout. Nothing sound distortion. PLUS...cool artwork! Add to that, it passes Uncle G's Senheiser Headphones test! Songwriting wise, 'Put Another Rock In That Bag' is structured / performed with a perfect beginning , middle part, and end that leaves the listener wanting PART TWO.

WARNING: The bar is raised sky high on this one. Like many others, intently waiting for what will follow.
Consider the Source - Put Another Rock In That Bag (Single Edit)