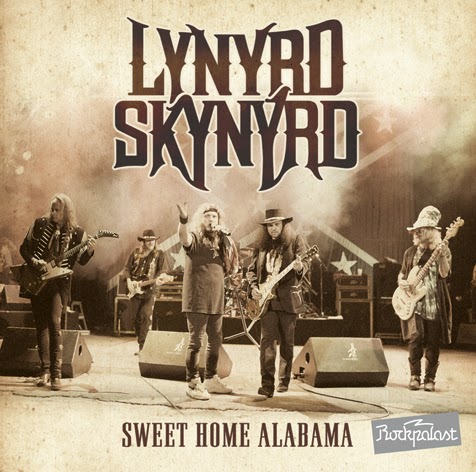 
On 1 June 2015, Eagle Rock Entertainment release “Sweet Home Alabama” by Lynyrd Skynyrd on DVD + 2CD set and LP [Cat Nos EREDV1131 and EAGLP637].  This release includes extremely rare footage of the original Lynyrd Skynyrd line-up and features all their classics including: “Sweet Home Alabama”, “Free Bird”, “Working For MCA”, “Saturday Night Special”, “Gimme Three Steps”, “I Ain’t The One” and many more. This is the first release of the audio from the show on CD.

Lynyrd Skynyrd are the ultimate Southern Rock band. Their signature three guitar attack coupled to superb songwriting and massive on stage charisma has rightfully earned them a reputation as one of the greatest live bands of all time. The original band infamously had their career cut short by a disastrous plane crash in 1977 which took the lives of three members plus two of their road crew and seriously injured several others. In 1987 the surviving members reformed the band with Johnny Van Zant taking the place of his brother Ronnie. This concert from 1996 captures the band on top form at Rockpalast’s Loreley Festival on 23 June 1996.

The Bonus Features [DVD + CD set format only] offer a real treat for Lynyrd Skynyrd fans we have three tracks from the Hamburg Musikhalle on 5 December 1974 featuring the original line-up of the band performing three classic songs: “Working For MCA”, “Free Bird” and “Sweet Home Alabama”.

“Sweet Home Alabama” by Lynyrd Skynyrd is simply a must for any fan of the legendary band.
Posted by Jon Kirkman at 12:54