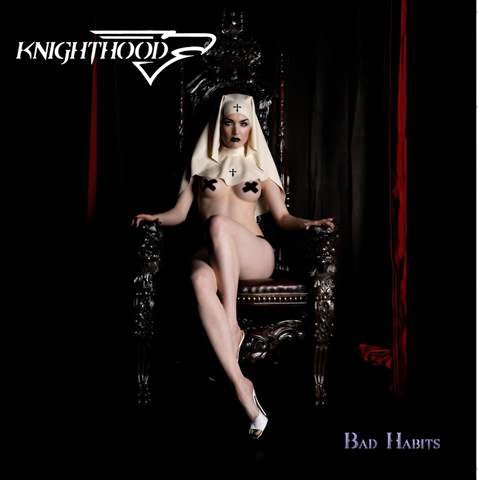 Aristocratic English rock is the way Bruce Dickinson of Little Angels described Knighthood. He went on to say that vocalist Frank Knight, “Has the power of thunder”. You can hear this for yourself when this Cumbrian heavy rock quartet release their debut album of pure rock genius “Bad Habits” on 1st December 2014 via Red Lola Records.

Descending from the Fells of The Lake District, Knighthood have a variety of influences ranging from the hard hitting Euro sound of Accept and the unmistakable classic feel of rock Gods AC/DC. This foursome have skilfully crafted a riveting sound that is laced with hooky riffs and under pinned with powerful vocals.

Formed in 2011 and comprised of Frank Knight (Vocals), Paul Curtis (Guitars), Spaniard Luis Antonio Guttera (Bass) & John Powney (Drums). Knighthood have worked hard on crafting a sound and quality that is far beyond their new status. They have recently secured support slots with Little Angels, Toseland & Skiltron (who Frank guest sang with at 2013 Bloodstock Festival). The band have already massed a growing following and a reputation for delivering a stellar live show. They have worked tirelessly on crafting a killer live set with sing along chants and well-crafted vocals, that will get into your head and not leave you alone.

In the Autumn of 2013 the foursome released their debut EP “Permission to Ride”. Which was greeted by rave reviews and airplay on Real Radio XS, Planetmosh and a host of Independent stations in the UK, Europe, USA, Japan and South America.

“Knighthood sound like they have been sent on a holy quest to bring back some good old fashioned hard rock into the world and on the strength of this EP they appear to have succeeded. I can’t wait to hear more! ”
Dazzle Rebel - TBFM Magazine

“Planetmosh Rating 10 AWESOME, THE GOOD: Too much to mention! THE BAD: Absolutely nothing bad about this group or album. A four member strong band of likeminded guys looking for a new edge and fresh sound in the old school style. This debut EP is a brilliant showcase for their combined talents, a four track CD just absolutely loaded with pure rock genius.”
Dave Bradbery - Planetmosh.com

“Bad Habits” is a hefty slab of 11 hard hitting heavy rock songs, From the opening title track with its powerful riffs and chanty chorus to the Thin Lizzy style duelling guitars of “Widow Ride” and the slower but catchy as hell “Crying To The Moon”. This quartet of likeminded rockers have delivered a debut offering that is destined to propel Knighthood to another level.