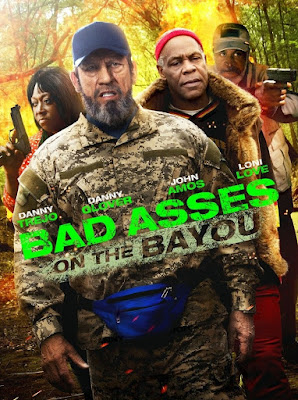 From writer / director Craig Moss comes the third installment, the first two in which I didn't see, of the Bad Ass film franchise. What started it all, a 2012 film entitled 'Bad Ass' staring actor Danny Trejo. The sequel called, Bad Asses, was released last year. One of those straight to DVD movies. Think positive. Both hugely popular on Netflix. New to me until I stopped to check out what the Redbox rental machine had to offer. Title caught my eye; Bad Asses In The Bayou. Starred Danny Trejo, John Amos (TV's Good Times), Danny Glover, and comedian Loni Love. She was born in Houston, Texas, and one I found out about a few years back by watching the now defunct chat show, Chelsea Lately, on the cable channel E! Loni is one funny lady! And now I know after viewing Bad Asses On The Bayou, quite the actress as well.

The newest offering from the Bad Ass franchise starts off with the main characters Frank Vaga (Danny Trejo) and Bernie Pope (Danny Glover) being invited, all expenses paid, to Baton Rouge Louisiana for a wedding. Again, what happened in the previous two films at least to me, really didn't matter. The setup was immediately there for this action comedy. So, no need thinking this can't be watched without seeing the first, and the second part, for I'm happy to report, that's not the case. Also, this morning, after having watched the film the previous night, I made it a promise to myself to catch the titles Bad Ass (2012), and Bad Asses (2014) as soon as I can. Seriously, after enjoying this latest installment as much as I did, it's a given I'll check out the previous two.

Many good things about this film. First off is the cast. From the stars to the extras, all did wonderfully. Was cool seeing Danny Trejo play a part that seemed to have more dimension than the roles I usually see him in. His comedic timing is perfect, something I never realized. And it feels so good watching him beat the crap out of characters that have it coming to them. Something that if I tried, would land my ass in jail or the hospital. And then sued and having all my shit taken away in a court of law. Back to Mr. Trejo, I have yet to see a movie he was in, that I didn't enjoy. Bad Asses On The Bayou is yet another to add to the long list.

Now keep in mind, the general premise is that Danny, and his best friend Bernie, played superbly by Danny Glover, are old. A lot of the jokes are going to revolve around that. Even older in the cast than these two, and in real life also, is actor John Amos. I have always liked this man. Such a believable actor. So sad when his character was killed on TV's Good Times. Fired is how Mr. Amos nowadays describes it. The half hour sitcom just wasn't the same with him gone. The roles, John Amos have played since, all worth checking out.

Once in Baton Rouge, all eyes are on Loni Love. Her characters getting married to this bright, young and unfortunately as nice as he is, wheelchair bound man. But it's her Daddy (John Amos) being filthy rich, that ends up being the root of the real problem. Here come the bad guys. Kidnapping and demanding a ransom be paid. What follows is a highly entertaining story, flawlessly filmed, and without any weak moments to bog it down. Contains a well mix of comedic and action moments that should keep the average viewer happy.

When I read the writer was also the director in the opening credits, my first thought wasn't good. Writers write dialogue, and too much of it makes for a boring motion picture. Can happen when a writer is also the director. Not here! So much so, I'm now a Craig Moss fan. Dude is obviously schooled and knows his shit. Still early in his career too. Future should be bright.

Using the IMDb website one to ten star rating system, whereas one star means it sucks through a very long straw, to ten stars meaning it's worth spending your hard earned cash on, Uncle G rates Bad Asses On The Bayou … TEN STARS! Fact is I really liked this movie. Am sure the film snobs could pick it apart, finding one or even more things wrong with it. Screw them! More fun watching the movie than it is dissecting it. Was a good at home DVD experience. Took my mind off paying the rent, and having to do yard work the following morning.

The whole purpose of spending valuable breathing time, sitting in front of a screen to begin with and not directly participate in life at that given moment, is to either educate oneself, or to relax, and chill out. Renting 'Bad Asses On The Bayou' helped me do just that. More the later. Not that I really learned anything. Mostly I just sat in front of the widescreen with a big smile on my face.

Background on the Author: Gary lives in Katy Texas USA with his wife of twenty years. They have a pet African Grey Parrot name Bella.
Posted by Gary "Uncle G" Brown at 11:54