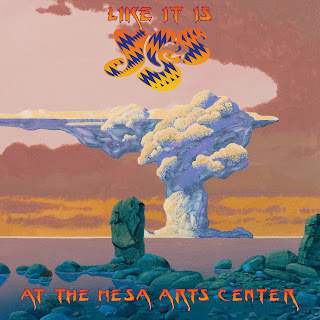 Yes
Like It Is: At The Mesa Arts Center:
Released July 3rd

On Tuesday August 12th 2014, YES jumped on stage at the Ikeda Theater in Mesa, AZ performing some of their most well-known and influential releases ever. Reflected in this new retrospective live chapter and perfect companion of ‘Like it Is – Yes at the Bristol Hippodrome’, this new live audio visual album offers two of their classic albums in their entirety, all in one concert: 1971’s FRAGILE, and 1972’s CLOSE TO THE EDGE.
Music audiences across the world experienced the albums – each representing an important milestone in YES’ career which encompasses sales of close to 50 million albums worldwide – performed from beginning to end.
In a career that has so far spanned more than four decades, ‘Like it Is – Yes at the Mesa Arts Center’ sees YES continuing with its tradition of symphonic progressive rock that remains timelessly fresh and innovative.