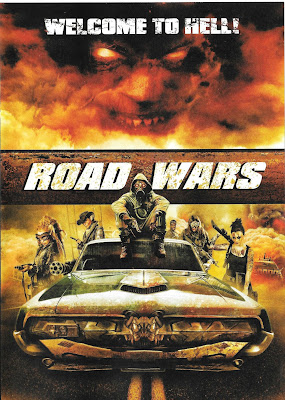 Just last month The Asylum released a new direct to DVD flick called, Road Wars. Around the same time as the new Mad Max movie hit theaters across the country. Yes, this is the same B movie studio out of Hollywood, California that makes movies similar to what you might find around that time at your local movie theater. Called, The Asylum. I mentioned them before in my reviews / columns. Been following the studio the last few years.

On the back cover of the Road Wars DVD it reads; "An action-packed Apocalyptic classic in the vein of Mad Max and Death Race." Since I NEVER saw a Mad Max movie, I'm going to have to take their word for it. I do own on DVD the original Death Race 2000, produced in part by the legendary Roger Corman, and rented (Redbox) the remake that came out in 2008, along with it's two sequels. Overall, cool action movies. Of course I am familiar with the Mad Max franchise. Since I dig futuristic science fiction tales, I know I'd appreciate it's stories. Just never managed to sit down and check them out. So in a way, a plus to watching The Asylum's Road Wars, because I only kind of know what to expect. My experience viewing clips from Mad Max either come from movie trailers, or the 1985 Tina Turner video (We Don't Need Another Hero 'Thunderdome') from Mad Max: Beyond Thunderdome. BTW … Tina ROCKS! 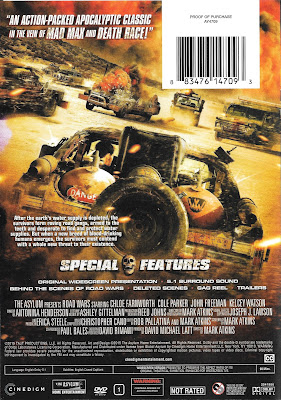 So I asked a friend after viewing The Asylum's Road Wars. I said; "Friend, did Mad Max have vampires or zombies in it?". After some uncontrolled laughter, the response I got was; "No!" Something else I was told was that only the second Mad Max movie is really worth watching, and that the other Mel Gibson flicks are; "Shit". Said very matter of fact by a guy who seems to know his B movie Apocalyptic movies. The comment itself is either here nor there, but I find it worth mentioning. Possible advice for future me so not to waste precious breathing time on a pointless activity.

Cutting to the chase, what we have here is a good story, with a twist. Entertaining I imagine for even those more up on the Mad Max movies than I am. The vampires are a variation one would definitely not want to encounter. Contains strong female characters. The in front of the camera talent all excel in their roles. Reading the credits for Road Wars on the IMDb website, I recognize behind the scene names associated with other productions from The Asylum, like those who worked on any of the Sharknado films. The latest, Sharknado 3: Oh Hell No! to be released this Summer. The Asylum knows what they're doing. Not one production they have even done, has never not profited. Close minded film goers who worship Sean Penn will proclaim to the World a film such as Road Wars to be a rip off, and therefor not worth one's time, and money. Uncle G says; "Bullshit!". I'd suggest these folks pull the stick out of their rectum, and loosen up some. Like it or not, there is a market for these types of motion pictures.

Road Wars, is a straightforward action yarn. Future Earth. Waters precious on a planet that's gone to shit. There's your story. Good thing fuel for bad-ass vehicles appear to be plentiful. No paying at the pump. Take what you need. Be always careful for Night Walkers, and Day Walkers could be lurking about. Game's over once bitten by them. If comparing itself to 'Death Race' movies, then it's more old school. Lots of drama. Enough going on to keep one's interest.

Rating: Using the same one to ten star rating system as the IMDb website uses, whereas one star means it SUCKS HORRIBLY, to ten stars meaning it's INCREDIBLY AWESOME, Uncle G gives The Asylum's latest direct to DVD releases, Road Wars, EIGHT SOLID STARS! For those into indy B movies like I am, add another star if you want. It's exactly what I expected when I picked it up for 10 bucks at the local Walmart. I already know that usually The Asylum puts out a solid product. Cool cover wrap. Includes bonus features such as deleted scenes, or a gag reel. Trailers for other Asylum projects. I feel like I'm getting my monies worth. For the wife and I to go see the latest Mad Max film, would cost me at least three times more than what I paid for this DVD. Upside, no driving back and forth to a movie theater, and the bag of popcorn I ate while viewing the film, didn't cost some outrageous amount of cash. Hooray for Orville Redenbacher! Classic Butter & Sea Salt is to die for!