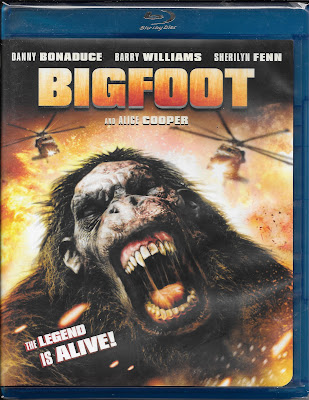 Note: This is a reprint of a review I authored / posted on a B movie discussion website. Date was 02 July 2012.

My wife and I this past Saturday night, watched the SYFY Channel's new original movie; Bigfoot. One one hand it was absolutely horrible, and on many levels. Yet on the other hand so cheesetastic, it would be one of those you didn't want to miss if a fan of 'B-Movies'.

With these types of films, lack of money usually affects the whole production. It's what happens when as a filmmaker, you dream of having a budget in the millions, and instead you're asking actors to work for scale because you don't have the budget to pay them properly like what they might get if they do another production. Money is important. Pays the rent. The best people to hire, asking too high a figure to even be considered. Plenty of good films are still made under these circumstances. I'd label Bigfoot a horror film, but in all actuality, this Bigfoot movie plays more like a comedy. And as far as cash goes, I'm sure the film profited like every other movie The Asylum makes. Laughing all the bank as the old saying goes.

Note: The Asylum does seem to have a working / winning formula going on. Nowadays the makers of TV's hit zombie show, Z Nation, and of the popular Sharknado franchise.

In a starring role, the Brady Bunch's Barry Williams. I have always had the impression that Mr. Williams seriously, could not act his way out of a paper bag. He seems to have only mastered after decades in the entertainment business, only a couple moods to be in while playing his parts; happy or stressed. When I say happy, it's more or less how one would appear naturally if in a good mood. Having a spring in their step. Remember the Brady Bunch characters? They were a lot of time, all nauseously like that. My guess would be the iconic family show would be how Barry learned acting skills such as this.

When I say stressed, it's uptight. In one scene he's dialing a cell phone. Imagine doing so using all your fingers. Looking like a spider is coming down for the kill. I looked at my wife and said; "he's not calling anyone doing that." I asked myself, I said; Self, how hard could it be to pretend to be dialing a phone so it would look like you were really doing it? A method actor would for real, dial the damn phone. This guy instead has magic fingers, he could just wave over the phone keyboard, and then it magically connected to the person he wanted. Meantime, my wife told me he looked constipated. I mentioned maybe he should perhaps eat more fiber. Not that Williams heard me. His role was that of a musician whose seen past success, and who is now an environmentalist. His supporters, a small group of young attractive women. In the beginning of the movie, they chain themselves to heavy equipment vehicles. Trees have to be removed so to make room for a big concert, that's being promoted by the local radio station.

Enter The Partridge Family's Danny Bonaduce. He isn't much better an actor than Barry Williams. Between the two he would be the better thespian. At least he displays more than two styles of which to deliver his lines. Could have been the roles they were portraying? Williams a no nonsense environmentalist. Bonaduce, a local DJ, and opportunist. Not that far a stretch for Danny, seeing that's what he pretty much does in real life.

Classic rocker Alice Cooper makes a cameo. One of the funniest parts of the movie, by the way. Giving Grandpa Manson his due, one of the better performances in the film, as well. Alice been dying on stage for decades now. Kind of has it down to a science.

BIGFOOT: This is all done by computer effects. Not that hard to find in the woods, I would imagine seeing that the creature would be over four stories tall. Think the Nancy Archer role in 50's B science fiction film, Attack of the 50 Foot Woman. Now with LOTS more hair. Add to that the creature HATES all people.

I did love the way Bigfoot killed its victims. My favorite way; picks them up and bite their heads off. For variety, others he would throw great distances. Stepping on people like bugs was also a way it dealt with those it didn't like. This of course provided for moments where seriously bad actors could hold their hands up and scream pretending the monster was right there, and seconds away from being pounced on. Then oozing between Bigfoots toes. Like I said; cheesetastic.

Special Effects: The Bigfoot monster, wasn't the worst. For other special effects were just downright laughable. Such as, the helicopters that were helping hunt Bigfoot. all appeared to be like toy models. I've seen better in Godzilla movies by the way. You can tell the actors when doing these scenes had a green screen behind them. And very little if any, experience acting with any believability at all. Was that obvious. They might as well threw their fake guns aside, and started dancing the jig. Certainly I would have enjoyed that more than watching people who claim they were actors, barely get through their acting assignment.

Other actors were involved that you might know their name; TVs WKRP Howard Hesseman, and independent film studio, Full Moon Features Meridian actress; Sherilyn Fenn. I didn't recognize the 47 year old Fenn, at all. She has that middle aged lady look to her now. Which is cool. We all get older. When a younger woman, she was very beautiful. Posed in Playboy. Done several films and television shows, over the years. Her acting skills nowadays, on the same level as Williams. At least judging by this performance. So much so that I was hoping throughout the movie that Bigfoot would get them both. The 72 year old Hesseman did the best among the three playing a small town mayor.

The Good News: The director had to have done this whole production, tongue-in-cheek. Directed by actor Bruce Davison. As an actor, he's given much better performances than the ones he's directed here. I love to see a clip of just scenes of Bigfoot killing people. Another got killed when Bigfoot threw a port-a-potty on them. It's really a borderline comedy. Think of it as that, and the popcorn flick actually improves some. Which helps because the script's only other functional use is being as an aide to assist house train a puppy.


Out of a ten star rating, I give this film made by The Asylum, six stars. That's being kind. It does have a fun cast, if not anything else. I blame the director and those behind the scenes for not capturing the full potential of what it could have been. More care with the overall special effects, making them just a tad more believable, instead of cartoonist, and I feel the movie could have been potentially a better looking film. And not so much the Bigfoot monster. This was actually the star of the film. It's a keeper. For down the road I see endless possibilities with the Bigfoot character; Bigfoot Vs. 2-Head Shark with the winner going against Mega Piranha, a 2010 Asylum film that also starred Barry Williams.