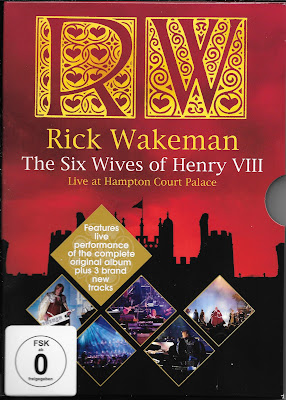 There is a chain of retail stores in Houston, Texas, named Half Price Books, that buys and sells new and used; books, albums, CDs, cassettes, I think I saw an eight track tape there one day not long ago, VHS tapes, movies on a disc the size of albums, Blue-rays, and DVDs. They also have collectibles. Pre-printed metal signs, key chains, computer games, and whatever other items one could think that would tie in with everything else I just mentioned. A very cool store I try to check out every so often.

On my last trip there, I picked up a couple DVD concert discs. Brand new, and offered at a price lower than what it was when it was a brand new item. Ones a Aerosmith concert from 2013 in Japan, and the other DVD I have chosen, a Rick Wakeman spectacle, professionally recorded in 2009 entitled; Rick Wakeman - The Six Wives Of Henry VIII: Live at Hampton Court Palace. Put out by Eagle Vision. Known for putting out quality concert DVDs / Blu-rays. Again they have outdone themselves. The Wakeman DVD comes with special features, and a nice booklet, giving detailed information about the special performance, and the subjects in which the music glorifies.

Rick Wakeman's 1973 album Six Wives Of Henry VIII was the second Rick Wakeman album in the first album collection I had. Journey To The Centre Of The Earth (1974) was the first. Then Myths and Legends Of King Arthur And The Knights Of The Round Table (1975) my third. Purchased that the first week it came out. I have since that time, purchased various versions of these three classic Rick Wakeman offerings. If an youngin' wants to know why Rick Wakeman is as famous as he is today, point them to any of those three albums. Or any that came after, which dig into various styles of piano / keyboard playing. I have my favorites; Rick Wakeman's Criminal Record (1977), and Rock N' Roll Prophet Plus (1993).

Rick's Six Wives project was extra special to me for various reasons. For one it was a rock instrumental. My Mom, (God rest her soul) being a professional musician and seriously into Herb Alpert back in the 1960's, introduced me to music without words. A preference today. Songs containing longer than usual passages of time in between lyrics, in my mind is a plus the majority of the time. The band Yes excelled at this, as did many one of their contemporaries such as Pink Floyd, and Genesis, just to name a couple.

My introduction to Rick's keyboard was the group, Yes. Another reason why the album Six Wives fits my taste, is because various Yes members appear on it. Early nineteen seventies. The Fragile / Close To The Edge / Tales line-ups. All but Jon Anderson, which includes Yes' two drummers at the time, Bill Bruford and his replacement, Alan White. Some of my all time favorite musicians on the planet. Them being on this album just makes it even better in my book.

This live version recorded over two nights, the first and second of May, in the year 2009, according to the keyboard wizard himself, is Henry and the Six Wives of Henry The VIII, as it was meant to be performed / presented. Long story short, way back when, their were recording limitations. Now the whole piece could be appreciated in it's entirety, as it was meant to be heard. And as the spectacle as it should be. Besides Mr. Wakeman, a very large number of professional musicians, a robust narrator, and a backdrop worthy of all the work involved to make the show go without a hitch. Again, performed two nights in a row, involving hundreds of people. The DVD I imagine the best of each song performed. So many good moments. Cool bonus features. A DVD worth purchasing, as I assume the CD is as well, in which I need to start seeking out. The additional music flows as freely as the original. If a fan of Mr. Wakeman's, then this historical 2009 Rick Wakeman concert DVD is a MUST HAVE.