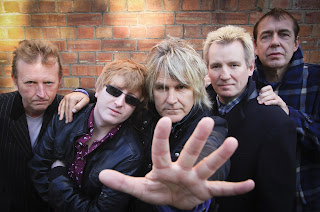 Due to unforeseen circumstances and scheduling issues, Big Country will now play The Forum, London on June 2nd 2013. All tickets are still valid to the re scheduled date.

Big Country, one of Britain’s most successful and best-loved rock bands, are touring the UK and Eire in April 2013 with a new line-up – and will release a brand new album later in the year.
After a 10 year break, the band returned to touring in late 2010. “After 30 years I would never thought I would be playing in Big Country again,” says guitarist Bruce Watson, “A band Stuart and I started last millenium in the hope of carrying on his dreams from his days in the Skids. We hope to do him proud.” Drummer Mark Brzezicki adds, “As Big Country continue to evolve, the journey continues. I am looking forward to expanding the journey into new territories and continuing our unfinished business across the world.”

Formed in Dunfermline in 1981, Big Country went on to become one of the most celebrated British rock bands. Selling more than 10 million albums worldwide the band toured with such luminaries as The Rolling Stones, David Bowie and Queen. The band stopped touring in 2000 and then came the death of Stuart Adamson in 2001. Apart from a 25th anniversary celebration in 2007 the band remained dormant until the end of 2010 when they toured again with Mike Peters of The Alarm. In 2013, 30 years after the release of Big Country’s debut album The Crossing – an album described as a “classic” by MOJO – the band’s new tour will feature their greatest hits and tracks from their forthcoming new album.