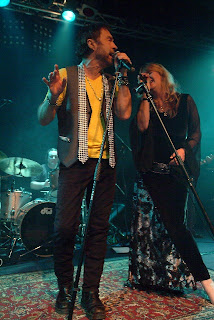 2013's concert has raised and all-time high of £54,000, which will be distributed to Willows Animal Sanctuary in Aberdeen, Scotland, Mount Noddy Animal Centre & The Cat and Rabbit Rescue Centre both near Chichester, England.

"Once again the evening was a huge success. Our fans and friends come through every time – it's quite amazing. Now Willows can breathe a sigh of relief, as this funding will see them through to July. Thanks to everyone from the fans, musicians, volunteers to all of the musicians and artists who donated items to be auctioned on the night." - PAUL RODGERS

On Saturday 30th March, Paul Rodgers and Deborah Bonham, and her band, along with special guests returned to The Venue in Chichester to raise the roof one more time for animal charities.
The main charity, Willows Animal Sanctuary in Aberdeen, takes in a massive number and variety of welfare cases from cats to pigs to horses. Currently, they are home to 300 animals.
Paul Rodgers and his wife Cynthia are Patrons of Willows.

Deborah Bonham and her husband, guitarist, Peter Bullick have adopted both of their dogs from Mount Noddy, which specialises in dogs and cats.

Cynthia Kereluk Rodgers and Deborah visited the Cat and Rabbit Rescue Centre near Chichester and were impressed with the care and handling of their 200 cats! So, a donation will be made to them as well.

Rock memorabilia were the hot items in the live auction, with two Autographed Led Zeppelin Posters bringing in £500 and £850. The highest grossing auction item was a Bad Company Autographed Guitar with tickets to a concert this summer, in the US, bringing £1100.

The biggest surprise of the evening was when Elaine and Chris Fairfax from Animal Friends Insurance handed over cheques to the tune of £15,000 to be divided equally between the three charities.

Deborah Bonham performed songs from her new CD 'Spirt' (Limited Edition pre-release CD Digipak out now and available on tour ahead of the September CD, Vinyl and Digital release) during her 1 hour set.

To the fans' delight, Rodgers played a 90 minute set of songs solely from his FREE catalogue, some songs he had not performed in 40 years!

"We are absolutely over the moon to have such wonderful, lovely talented people supporting Willows Animal Sanctuary! It means so much to have dedicated Patrons, Paul Rodgers and Cynthia Kereluk Rodgers. They are such kind hearted and beautiful individuals and care so much about animal welfare. Our thanks go to all who helped with the fantastic concert, we know it took a lot of organising and many dedicated volunteers. Deborah Bonham and Peter Bullick are also amazing, thank you both so much for all the time and energy you have put into this concert. Everyone at Willows thanks you all from the bottom of our hearts." – WILLOWS ANIMAL SANCTUARY