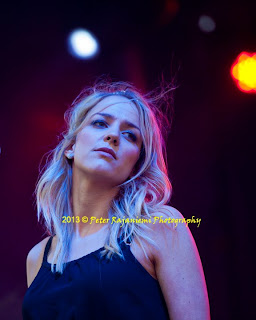 
Today I have received some news which leaves me with mixed feelings.
IO Earth a fantastic British Rock band have announced that their original singer Claire Malin is to step down from singing with the band. The reasons are that Claire has recently been ill and unable to fulfill her commitments to the band.. The band however have announced that her place in the band will be taken by Linda Odinsen.

The mixed feelings I have are  sadness due to Claire having to stand down. Claire made an important contribution to IO Earth  and is featured on the bands last studio album Moments and the recent Live At Rosfest album. Check them out as they are both excellent albums.

I was lucky enough to work with IO Earth recently on the Cruise To The Edge  and Linda stepped into the breach of what was certainly a major commitment for thew band and helped them fulfill that commitment. When I first met her she was backstage with earphones in listening to the IO Earth material having only filled the vocalists role just three days before the band flew to America for the cruise. Talk about a trial by fire!

Despite the positive energy coming from all the band there was also a lot of tension  and rightly so this was an important concert for the band. They needn't have worried though as the concerts went well and they were warmly received by everyone on the cruise from the audience to fellow musicians. No one for a minute would have thought that the band had been in existence with this line up for anything other than forever.

Sometimes things happen for a reason and sometimes we just have to trust what is in store for us. Sometimes out of bad things come good things and in this instance I think that is very true  but the performances on CTTE were not of a band struggling to come to terms with a difficult situation but one of a band determined to have fun and present themselves in the best light they could.....They succeeded Everyone was incredibly impressed. The band were magnificent.

So still with a mixture of sadness for Claire but tempered with happiness and positivity for the band I am really looking forward to what this incredible band can now offer. Claire did a wonderful job and her legacy with the band will be the recordings she made with them but the future is now with Linda  and the future for IO Earth must surely be bright.

So in closing Thank You Claire for an amazing job you have done with IO Earth and Welcome Linda. I look forward to working with you as part of IO Earth in the future

For more information on the band please check out their official website Here: