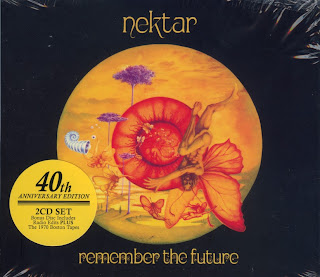 I was actually excited when I opened a newly delivered padded envelope and found the 40th Anniversary edition to Nektar's 1973 album Remember The Future double disc CD inside. Wow !! If I never mentioned it before, Nektar's Remember The Future album, their forth studio release, is one of my favorite all time prog rock albums. If I could only bring 10 music CDs to a far away place and have only them to listen to while there, Nektar's Remember The Future would go with me. This version. The one Purple Pyramid Records (a division of Cleopatra Records) just released. Might be considered cheating since it comes with a bonus CD. And not one of those you never end up listening to CDs that typically accompany such anniversary editions. So really it's a double disc set, which emphasizes the main record Remember The Future, and then for good measure throws in another totally cool disc that you'll end up playing as much as disc one. We can also refer to that as disc two, as long as one remembers that originally Nektar's Remember The future was just one album with one song broken into two parts; side A & side B, released on 8-Track, cassette, and of course wax. Coolest artwork ever !!

The song Remember the Future is a concept song. Lyrics tell the story of a super intelligent being in the form of a blue bird who finally finds a human being it can pass on important information to. The stories strong enough so that it acts as a strong glue that connects the variety of musical compositions together as one prog rock masterpiece. Was a hit here in the States when first released. A lot of us teenagers and young adults back then were open minded and patient to where we could chill and embrace the album as a whole. The timing was right, as was the product Nektar was putting out. Previously releasing strong albums in terms of musicianship and over all sound, Remember The Future would take the band on it's first journey headlining venues all over the World. A far out light show accompanied the band in performances that would typically last 2 to 3 hours.

Good news for in the year 2013, the super prog group Nektar, is still around. They released a new CD of them doing covers just last year (A Spoonful Of Time), and are expected to hit the market with new music soon. Forty years and counting. Their song Remember The Future, almost forty minutes of superb and rather unique guitar playing, bass playing, drumming, keyboards, and vocals that carry away the listener when listeners minds open and submit to suggestion with lyrics that start of with; Take a trip back in time.....

An Uncle G confession. I can't stop playing the bonus material on here; disc two. Starts off with radio edits from the Remember The Future album. I tend to think of them as attempts made by the record company to make additional money off the product. Rarely works with prog rock. We got three of them. Cool to hear at least once, and have in the collection. What's ever cooler is tracks 4 to and including 11; The Boston Tapes. That's what I keep playing on my home stereo, over and over again. Music believed to have disappeared off the Planet until by luck found and in excellent condition. Again...WOW !! Greatest news ever !! Has that classic 1970's sound. I'll sum up these bonus tracks by describing them as; A road trip as to where a band could go musically when it's first allowed to spread it's wings.

Rating: Using the one to five star rating system, I rate this wonderful 40th Anniversary issue of Nektar's 1973 hit Remember The Future; 5 Stars (to the 10th power). Packaging is well done. Contains a cool booklet, and photos. Also, real quotes from actual band members. I can't be happier adding this to my classic rock CD collection, as should you. Nice job Purple Pyramid Records, and especially to the masterful creativity of Nektar. For without, I could not be typing any of this.