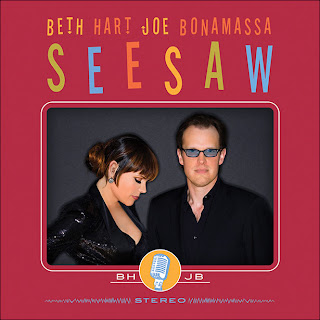 LA-based singer-songwriter Beth Hart, known for her raw and powerful blues-rock sound, wraps her expressive vocals around classic soul covers on “Seesaw”,the second album that grew out of her musical ties with the acclaimed blues guitarist Joe Bonamassa. The album is released on Deluxe CD+DVD and Double Vinyl in the UK/Europe on Monday 20th May by Provogue Records (followed by US release on Tuesday 21st May).

After their first successful collaboration on Don’t Explain this highly talented duo is back with Seesaw. As with Don’t Explain, the Seesaw album is tastefully produced by Kevin Shirley(Black Crowes, John Hiatt, Joe Bonamassa). "Beth’s got a pretty heady voice, very reminiscent of Janis Joplin," says Shirley. "She’s also got a lot of Etta James in her. With this material, there’s gentleness to the way she delivers the most heartfelt tunes. She’s done a fantastic job."


Bonamassa and Hart crossed paths numerous times whilst playing the same festivals in Europe. In early 2010, Bonamassa attended one of her concerts in London. "It was killer," says Bonamassa. He suggested they do a project together sometime. Don’t Explain took shape that summer. Now, two years later, the follow-up album, Seesaw, captures 11 new blistering tracks, including covers from Billie Holiday (ThemThere Eyes), Melody Gardot (If I Tell You I Love You), Etta James (A Sunday Kind Of Love) and the title track Seesaw, made popular by Aretha Franklin.

Hart and Bonamassa will perform a special UK concert at the Hampton Court Festival on Monday 24th June.
Posted by Jon Kirkman at 15:48