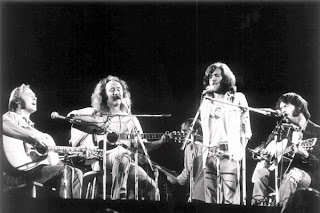 After years of work, Crosby Stills Nash and Young are finally gearing up to release a live album from their 1974 reunion tour. "It's going to come out August 27th," Graham Nash tells Rolling Stone. "It's going to fuckin' stun people. We only multi-tracked eight or nine shows from the tour, and we've chosen the best from those gigs. We've had to do a little tuning, but not that much . . . But the spirit of the band! If I take myself out the band and look at it, it was a fuckin' great band."

David Crosby shares his bandmate's excitement. "I am one of the most egotistical people on this planet," he says with a laugh. "But the legend looms larger! You have to remember that in 1974, the Beatles were over and the Stones were playing a completely different kind of music. When I hear this shit, I think, for a moment we were probably the best band. It's startlingly good."

They have yet to settle on a title. "I want to call it What Could Possibly Go Wrong?" says Crosby. "I'm going to dig my heels and seriously fight for that. You can't hear that without laughing your head off. It's important to look at yourselves with a sense of humor in retrospect and realize what gigantic egos we had and what idiots we were. But I think it's a great title. If I don't get it, I'll threaten to quit the band – at which point I'll be reminded that there's no band to quit!"

Crosby's proposed title refers to the precarious state the band was in when it reunited for a highly lucrative stadium tour in the summer of 1974. The group split up in 1970 and relations between members were, at best, precarious. Many of them were also dealing with serious drug problems. It's since been labelled "The Doom Tour." "We did one for the art and the music," Stills Told Journalist Cameron Crowe  at the time. "One for the chicks. This one's for the cash."

"The tour was disappointing to me," Neil Young told writer Jimmy McDonough in his book Shakey. "I think CSNY really blew it. Last time I played with 'em had been two or three years before that. They hadn't made an album, and they didn't have any new songs. What were they doing? How could they just stop? They wanted to put out a live album, and I wouldn't put it out – because it had all my songs on it."

Listening back to the actual tapes has given everyone a different perspective on the tour. "Reports we weren't singing well aren't true," says Nash. "I mean, occasionally, but not in the songs that I chose. This stuff is fuckin' magic, though it is true there were so many drugs and it was chaotic . . . I've got a version of a song that I wrote for Barbra Streisand that Joni Mitchell came and sang with me at Wembley Stadium in front of 100,000 people. It one one acoustic piano and me and Joni. Just magic."


Young has insisted the album be released with the best sound physically possible. "He's got it at two million bits," says Crosby with a laugh. "He's a fanatic. You can get him mad by just saying 'MP3.' This is getting mastered at the highest quality available in the world."

The 1974 tour wrapped at London's Wembley Stadium on September 14th. They filmed that night and at least one other, but don't expect to see any video footage in this package. "I don't think Neil's gonna go for that," says Crosby. "He doesn't like the way he looked. He doesn't like his haircut on that tour."

Crosby, Stills, Nash & Young haven't toured in seven years. "What do we do after this live album comes out?" asks Nash. "Do we just let it lie there and fucking die, or do we do limited promotion? That's not cowardly, but that's not the way to do it. In my perfect world – and I'm only talking about what I would do – I would delay the release of this until the spring of 2014. I would ask David and Stephen and Neil to take three months off their busy lives and go out on tour to promote this record."

As of now, such a tour is theoretically possible. Crosby, Stills and Nash wrap a world tour in England on October 15th, and Young has no dates on the books after mid-August. "I have a feeling Neil is gonna want to take some time off after that," says Nash. "But how much fucking time do we have? I'm 71 years old. I just want to let people know what great music we could make because drugs are out of the way now. Stephen and David are totally straight now, and so alive! It would be fantastic. That's what would happen in my perfect world."

Nash realizes another CSNY tour remains a longshot. "I dream and I pull myself towards the dream," he says. "Every moment I was ever onstage with Neil Young I gave him my entire being. We still have the ability to be a great fucking band. We have all been writing so much music lately. We don't have to do 'Our House' until the cows come home. We don't have to do 'Long Time Gone' or 'Southern Man' unless we really feel like it. That's one thing about the 1974 tour. I did a version of a brand new song and I'm shouting out the chords to the guys live on stage before we do the fucking song! It was insane. Very thrilling."

Another factor limiting the odds of another CSNY tour is the simple fact they haven't spent much time together in recent years. "I'd love to be Neil's friend," says Nash. "We're great friends on some level and great acquaintances and musical partners on some level, but I can't call Neil my friend. I have never had his cell phone number. That's a small detail, but very deep."

From an Article in Rolling Stone April 2013