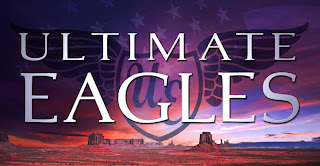 ’I thought I was listening to the real thing’...Chris Evans, Radio 2

Ultimate Eagles are heading out on a 19 date UK tour this May in support of the 40th anniversary of The Eagles.

Ultimate Eagles are more than just a tribute... they are definitive devotees performing songs from every album and every era, delivering forty years of brilliance with both accuracy and reverence.

The band who are currently in their 4th year of existence have had over 1,300,000 views on youtube and last year sold over 45,000 tickets in UK and Europe making them  Europe's number 1 tribute to the music of The Eagles.

The band features Danny Vaughn (Waysted, Tyketto), Chris Childs (Thunder, The Union, Paul Young), Chris Wright, Christian Philips (Duffy, Sonic Executives), Ryan Aston (Abbamania) and Michael Lawrence (The Commitments). One look at the biographies and accomplishments of these individual players will tell you a great deal about what to expect.

THE ULTIMATE EAGLES... recreate the music of the Eagles with reverence, accuracy, excitement and with a stage show that focuses its bright lights on the 1970’s when the Eagles were at their mightiest. Catch them live at the below dates.

Tickets info can be found at http://www.ultimateeagles.com/site/  Tickets vary in price and are subject to booking fee.

www.ultimateeagles.com
Posted by Jon Kirkman at 02:48