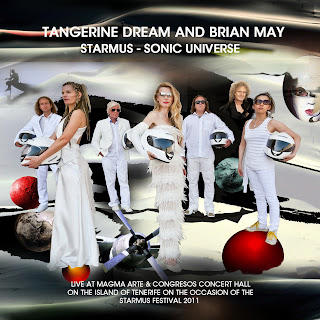 One of the most diverse and exciting musical collaborations is finally ready to hit your speakers on double CD: Tangerine Dream announces the eagerly awaited release of STARMUS – SONIC UNIVERSE with guest guitarist Brian May. The result of a very special set at the Starmus Festival in sunny Tenerife, the album immortalizes an unlikely yet heavenly match, as Tangerine Dream join forces on stage with the legendary musician.

May has earned himself a place in rock history with one of the most iconic bands of all times: Queen. Ambient pioneers Tangerine Dream were the first band ever to use Moog sequencer rhythm live on stage and are well known for their highly acclaimed Hollywood film scores. However, the fusion of such different talents is not the only thing making ‘Starmus – Sonic Universe’ unique. 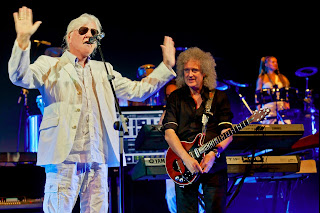 The Starmus Festival was held in June 2011 to celebrate the 50th anniversary of Juri Gagarin’s first spaceflight; it was attended by spacemen Neil Armstrong, Buzz Aldrin, Alexei Leonow and Jim Lovell amongst others. The first track of the album, ‘Supernova’, features the real sound of acoustic pressure waves from stars, captured by astrophysicist Prof. Garik Israelian - also founder of the event. ‘We did send it to Brian some time prior to the concert, so he had the chance to get an overall feel for this very progressive score’ – comments Edgar Froese – ‘He’s not only an exceptional guitarist, but also a very open-minded artist to work with’. The second track on Starmus is May’s solo hit Last Horizon: ‘We knew that one already’– says Edgar – ‘so it was easy for Brian to join on guitar’. Brian May is back again at the end of the set for Sally’s Garden, a traditional Irish air arranged by Tangerine Dream, and a very special version of We Will Rock You with a coda ‘largely improvised by us all on the spot’ –according to May.

The stars that outshined Tenerife’s summer sky that night are now available for you to listen too and enjoy on this double CD. Pre-order Starmus – Sonic Universenow only through the Tangerine Dream Store at www. tangerinedream-music.com
Posted by Jon Kirkman at 13:23