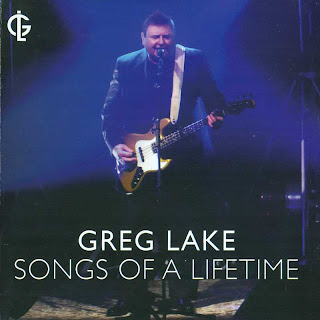 I got to know Greg Lake from his involvement with the prog rock group Emerson, Lake & Palmer, which began when I was a young teenager. The first ELP album in my collection was their self-titled debut; Emerson, Lake & Palmer (1971). Was twelve years old at the time when it first hit my record player. This is back in the early to mid 1970's by the way. I absolutely loved the ending of the song "Lucky Man" where Emerson came in on the Moog synthesizer, as well as the song "Tank" and its climatic ending when the music jumps from one speaker to another. Then there is that cool-ass jam at the end. Play it really loud and with the bass turned up and you’ll blow out most ordinary speakers. It's fun to watch. The whole ELP album is absolutely solid (meaning perfect) and of course the song "Lucky Man" would become the band's first, and I would contend, most enduring hit.

Now jump ahead over forty years to Greg Lake's new CD entitled Songs Of A Lifetime. In my opinion, an extraordinary live release. My only complaint is that it isn't a longer show. Could have covered more material and been at least a two-disc set. What is here is absolutely amazing. Held my attention from the coolest (updated) 21st Century Schizoid Man intro to the encore of one of ELP’s greatest hits; Karn Evil 9 First Impression Part Two. Sandwiched between four decades worth of some of the best, well written and performed songs from an outstanding career that is far from over.

For those unaware, Greg Lake is an accomplished multi-instrumentalist. If he skipped all that, Mr. Lake would still be known in the music world as a lead singer providing some of the strongest and powerful male vocals in rock n' roll. I remember reading an interview with Keith Emerson and him saying (paraphrasing) that Greg's voice instead of getting weaker as a tour progressed which in normal in that situation, instead got stronger with every show. Now the tone itself, the sound omitting from Greg's mouth, matured over the years. Is somewhat deeper, and in being so, more commanding. Lake hits a note and carries it to the next planet. Fucking amazing...I don't know what else to say, and I'm sure Mr. Emerson would agree.

Reviewers dilemma. I should come clean. I’m an admitted fan of Mr. Lake for pretty much near my entire life. I ask myself...I say Self; Can I write an unbiased review of Greg Lake's new CD, Songs Of A Lifetime? Being a Texan, guess I need to ponder that some. Let me say this. My Mother was a professional musician. I grew up in the 1960’s in a music-friendly environment except for when I was in my single digits and playing Led Zeppelin’s Misty Mountain Hopon the old record box loud enough to wake up my Pop. Can’t say he cared for rock music much. Especially Led Zeppelin at 7AM in the morning. Reason for the story is because I believe after living decades myself where I allowed music to be a cornerstone in my existence, plan and simple; I know good music when I hear it. I was brought up listening to and watching real musicians perform on the television, back in the 1960's. Maybe they were backing up the Andrew Sisters in a Abbott & Costello movie, or it was a cool rock band that was a special guest on the Smothers Brothers Show. Since the mid seventies and going to concerts on a regular basic, witnessing some of the most talented musicians rock n’ roll has even offered, including one Mr. Lake and getting to see and hear in a live environment, the wonderful music he participated in over the decades. As a fan of progressive rock / jazz fusion my ears were filled with some of the most talented musicians to come down the pike. Out of the pack, Greg Lake has always been, and is a standout performer to this day.

Now having all that experience, music is opinion based. One music lover treasures what another one thinks is crap. Regarding myself, most will say that I am opinionated. So who better to review Mr. Lake’s new must-have CD in your classic rock / prog collection? So am I biased? Well I do own just about every CD Mr. Lake has on his discography. Still...I’m not a fanatic, as I am loyal. My homework is done. I know the subject matter. Straight up, Lake mastered the storytelling format like he seems to do with anything else relating to music. Can't be biased, when based in fact. This CD is a more traditional solo artist performance that's really the foundation of live entertainment itself. With just a guitar and his voice, Greg Lake shines and in doing so proves that the basics and not so much all the glitter that comes with being a rock star, is all you need to draw attention, and much applause. His band adds layers and helps paint visual pictures that only Mr. Lake could tell. Some of these provided by a gentleman name; Pete Sinfield. Lake's sometimes collaborator, Mr. Sinfield, could write a grocery list and make it worth the time reading. Together Lake / Sinfield have put out some outstanding work including the song; I Believe In Father Christmas (1975). Hopefully included on the future sequel to this storyteller CD.

FOUND INSIDE -- Nice surprises here. Very well done and arranged covers of "Heartbreak Hotel" and "People Get Ready". The Elvis cover motivated me to dig out a couple Elvis CDs and give them a spin driving across Space City. Warning; Greg's story about the King, and then the follow up song he does, if an Elvis fan already, will motivate you to start digging in your Elvis collection, as did I. Said in my best Elvis vocal impersonation; Mr. Lake...thank you very much.


Uncle G’s Rating: Using the one to five star rating system, Uncle G gives Greg Lake's Song Of A Lifetime: 5 stars (to the tenth power). I consider Lake's Songs Of A Lifetime a must have CD in any classic rockers collection.

Confession: As much as a rocker as I think I am, I so dig ELP / Lake's C'est La Vie.
Gary Brown
American Correspondent for Classic Rock Radio Dot EU