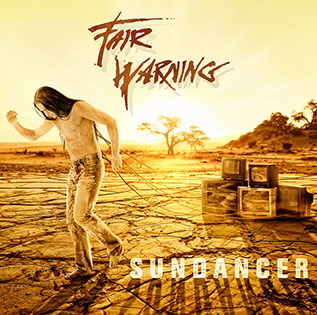 Germany’s superlative melodic hard rockers Fair Warning have confirmed the release of their highly anticipated seventh studio album, ‘Sundancer’, on SPV’s Steamhammer label on May 27th. ‘Sundancer’, the follow – up to 2009’s incredibly well received ‘Aura’ opus, will be available as a 14 track jewel case CD, as a digipak CD containing 1 bonus track and poster, plus for download.

‘Sundancer’ like Fair Warning’s previous six consummate studio albums, is an absolute prime example of melodiousness, vitality, complexity and confidence. “Even if our music can still be classed as melodic rock, the new songs nevertheless document a broader stylistic range than our previous releases” explains bassist Ule Ritgen, adding “We make a point of avoiding any particular stylistic agenda; we’re open to influences from all directions. After all, it doesn’t matter what inspires an idea, it’ll always end up a typical Fair Warning song.”

Fair Warning’s Tommy Heart (vocals), Helge Engelke (guitars), Ule W. Ritgen (bass) and C.C. Behrens (drums) have built a massive following in their native Germany and Japan, where they have become superstars and regularly sell out stadium sized gigs, since their inception over two decades ago. They burst out of the starting blocks with 1992’s self-titled debut album, which firmly established the band in Germany and went platinum in Japan. Fair Warning then went on to win over many more rockers around the rest of Europe with their ‘Rainmaker’, (1995), ‘Go!’ (1997) and ‘Four’ (2000) albums, following tour support slots across the continent with the likes of Status Quo, Giant, Blue Oyster Cult, Saga and Whitesnake. Fair Warning re-united after a five year hiatus to release the powerful ‘Brother’s Keeper’ album in 2006, and then the incredibly well-received ‘Aura’ in the Spring of 2009, an album even more steeped in old-school first class, classic, melodic rock than its predecessor.

Following the release of ‘Aura’, Fair Warning filmed and recorded their sold out Japanese stadium tour dates and Loudpark Festival appearance in Tokyo for the ‘Talking Ain’t Enough – Fair Warning Live In Tokyo’ CD and DVD, released in November 2010. Guitar Techniques Magazine reviewed the CD in their Spring 2011 issue:- “Although little is known of Fair Warning here in the UK, on home soil (Germany) and in Japan they are huge. They have turned melodic heavy rock into something their very own and are fully at home in a stadium sized gig. They were welcomed in Japan in 2009 in response to sales of their ‘Aura’ album in 2009. Their sound is exciting and huge and if you still enjoy the power and performance of what is essentially 80’s rock then you’ll love this. Tommy Heart is a great singer and frontman and Helge Engelke does all the soaring and shredding you could want a guitarist to do. On the continent, this style of performance has never really gone away so it’s hardly surprising that some of the best hard rock bands today also come from there. In the current British musical scene this is heavy relief; loud, proud and exciting!”