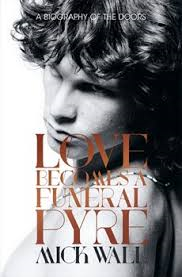 New Biography On The Doors Published

"Think you know the story of Jim Morrison and The Doors? This revelatory and explosive biography from critically acclaimed rock journalist Mick Wall will make you think again."


Well now you will with the definitive biography, Love Becomes a Funeral Pyre, of the legendary rock band and their iconic frontman Jim Morrison, written by Mick Wall, one of our most revered music writers and one of the last journalists to interview Ray Manzarek.


The Doors have sold over 100 million albums. Inducted in the Rock and Roll Hall of Fame in 1993, they received a lifetime achievement at the 2007 Grammy Awards, and were the first American band to accumulate eight consecutive gold LPs. Yet the story of The Doors ended as badly as did the 1960s: a startling decade the music and story of The Doors both defined and helped vilify. Along with evoking the cultural milieu of Los Angeles, in Love Becomes A Funeral Pyre Mick Wall captures the true spirit of that tarnished age with a brilliantly penetrating and contemporary investigation into the real story of The Doors.

Mick Wall is one of the most revered music writers, and was the last journalist to conduct a wide-ranging in-depth interview with Ray Manzarek before he died, from his home in California, just before Christmas 2012. Mick Wall was the founding editor of CLASSIC ROCK magazine. He is the author of numerous bestselling music titles including books on Iron Maiden, Led Zeppelin, Don Arden and John Peel.

https://twitter.com/WallMick
Posted by Jon Kirkman at 18:38