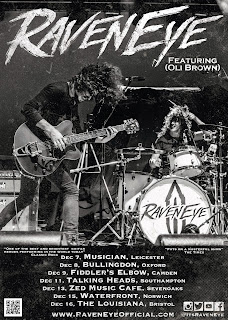 Oli Brown, the multi-award winning guitarist/singer-songwriter redefines his career, forming power-rock trio ‘RavenEye’, along with drummer Kev Hickman and bassist Aaron Spiers.
Raven Eye have been slamming audiences with their signature heavy riffs and incendiary live shows in Spain, France and Italy as well as supporting Joe Satriani on his European tour. Now they take their stand in the UK this December. Whether it be straddling a bass drum high into the night or jumping into a raucous crowd, Raven Eye is a high-energy rock act not to be missed.

Like the beginning of a good joke, the two Englishmen and an Australian have all travelled different paths up until the band’s formation this year. Oli Brown has spent 10 years touring the world under his own name and in that time released 4 albums and established himself as one of the most formidable guitarists/front men in the UK scene. Kev Hickman has seen his fair share of international touring, and with an unforgettable stage presence, he has developed an intense, hi-octane performance. Aaron Spiers tore into the UK music scene in 2012, and with his heavy low end, fuzzed out tones and solid presence, he has established himself as a force to be reckoned with on stage.

After meeting and creating music together, the trio knew that this would be their musical future. Here beginsRavenEye.

With only 7 gigs listed on the tour, get your tickets and become part of the show.
Details here:

www.Facebook.com/ItsRavenEye
Posted by Jon Kirkman at 22:12