Oh yes! How exciting  is this, my fellow Canadian vegetarian rocker Bryan Adams is a-comin' to the Yew Kay. Ok ok  sorry, it's hard not to get excited  ;-)

Hard to believe that Bryan has been pleasing ears for all these  decades  (such a timeless sound!) but here he is with  Reckless 30th Anniversary Tour 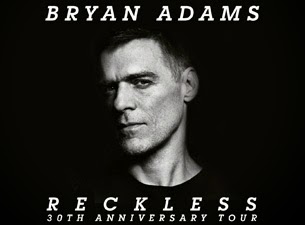 Reckless was his 4th studio album. ( co-produced by Bryan  Adams and Bob Clearmountain )  it was one of  his most successful albums, selling over 12 million units and reaching high positions in albums charts worldwide
Six singles were released from the album: "Run to You", "Somebody", "Heaven", "Summer of '69", "One Night Love Affair", and "It's Only Love". All six singles made the top 15 on the US Billboard Hot 100, a feat that at the time had been accomplished previously only by Michael Jackson's Thriller and Bruce Springsteen's Born In The USA.


Jumping up and down and yelling ''I wanna go  to a show'?  Well  the tickets  are on sale NOW for the Reckless 30th Anniversary UK Tour in November !
Live Nation UK presale started  April 9th. Public on sale Friday, April 11th @ 9am. Posted by Marilyn Michaels at 19:22