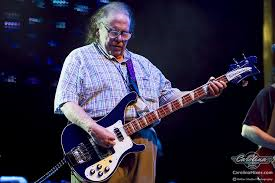 
The members of the Atlanta Rhythm Section are sad to announce that Paul Goddard, our bass player and a founding member of the band, died today after a brief, sudden illness.
Paul was 68.


Paul was frequently singled out for the flawless and tasteful tone of his Rickenbacker 4001 and Fender P bass guitars on ARS's string of hit singles, which began in 1977 and included "So in to You," "Imaginary Lover," "I'm Not Gonna Let It Bother Me Tonight," "Do It Or Die" and a remake of the Classics IV's "Spooky." Rolling Stone magazine voted his bass solo on "Another Man's Woman," from the 1978 ARS live album "Are You Ready" as one of the top five bass solos of all time.


He had retired from touring in the mid-80s, but returned to the band in 2011. He still loved to play on road, actually more now than when the band was at its peak.
"I knew Paul when he was a guitarist, and maybe that's why his bass playing was so musical," singer Rodney Justo said. "And to go with that musicality was a unique sound that made him so identifiable to fans and other musicians as well.  Yes, at one time he was 'that big fat guy that played bass,' but once he started playing, he wasn't fat. He was a giant."