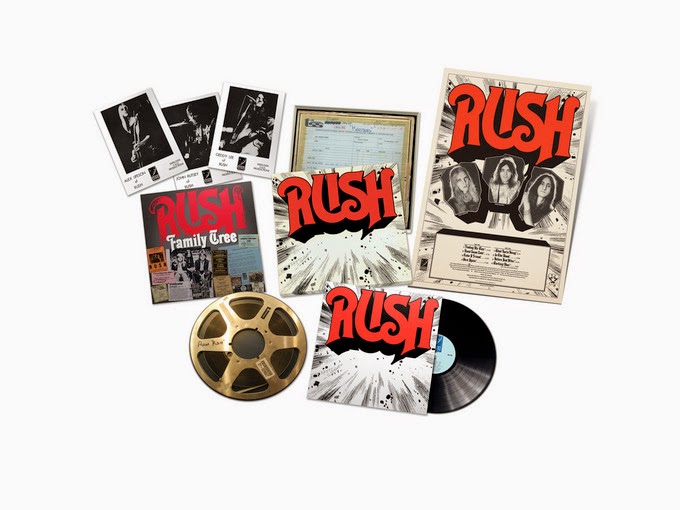 Rush are as we all know one of the Biggies in terms of Rock bands. Hard to think however that their studio debut was released forty years ago this year. well the fact of the matter is that yes it is forty years since this self titled album was released so now the powers that be and these days that also includes the members of Rush see fit to celebrate the anniversary of the release of this album with a boxed set of the vinyl album with deluxe packaging.So what do we get for our Dollar so to speak.

Well, the  vinyl has been remastered from the original quarter inch master tapes at Abbey Road Studios and pressed onto heavyweight virgin vinyl. The sleeve is an exact replica of the first edition of the album on Moon Records. Inside the box holds an original shop poster, 3 individual photos of each band member and an intricate band family tree. All alongside a download card.

The audio quality considering the age of the recording is actually very good and the playing?  Well obviously not quite as sophisticated as the band are now but the spark of what the band would go onto is all here. Sure it sounds like a lot of three piece bands from the time but in songs like Working Man, Finding My Way and In The Mood were certainly a little more sophisticated than the rest of the album and are still considered key songs by the bands now massive fan base

Whilst very "Of its time" Rush certainly was a great leaping off point for the band and while from this point on the band would improve with leaps and bounds for many this was were it all began. Of course this album is the only recording to feature original drummer John Rutsey who sadly passed away in 2008. He was replaced by Neil Peart shortly after the release of this album and the line up has stayed the same ever since.

In terms of a release of course many fans will already have this and of course on vinyl there are no extras in terms of audio, but would you want that? I think not  and while the packaging is the real pull here  it will be a nice collectible for the hardcore Rush fan and as such serves the anniversary well. As far as I am concerned really this is a must have album perhaps not representative of the band in 2014 but certainly an excellent start of something that went on to become the foundation stone of one of Rock Music's most cherished acts.
Posted by Jon Kirkman at 16:49