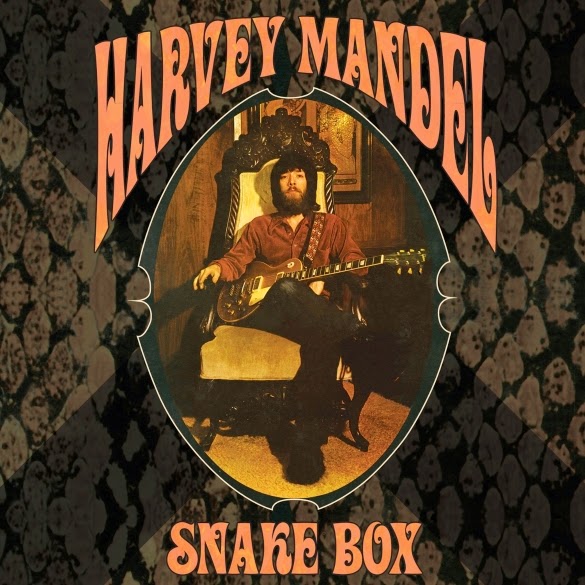 Innovative blues guitarist Harvey Mandel, has had the kind of career that musicians dream about. Most known for his pivotal work with blues rock institution Canned Heat in 1969 & 70 including their legendary performance at Woodstock, Mandel has over the course of his 6 decade career collaborated with music luminaries such as John Mayall, The Rolling Stones, Love, The Ventures and many more! But Mandel’s genius playing truly shines on his solo efforts, which he began releasing in 1968, and continues to release to this day. Now, some of these early solo albums are being made available in a deluxe 6CD box set from Purple Pyramid Records on January 20. The limited edition Snake Box includes 5 classic solo albums each packaged in its own sleeve with original artwork plus a bonus 1968 concert recording and a full-color booklet with in-depth liner notes! Taking its title from Mandel’s nickname “The Snake” given to him by Canned Heat’s keyboardist for his cracked leather jacket and his snake-like guitar licks, this box set is an essential piece for fans of this lethally talented musician.

Harvey Mandel began his career as the original guitarist for Chicago blues legend Charlie Musselwhite, appearing on his 1966 debut album Stand Back!. He then relocated to the Bay Area, performing often at a club called The Matrix, where local favorites like Jerry Garcia and Elvin Bishop would sit in and jam (a recording of which makes up the bonus disc of Snake Box). He then met up with renowned producer Abe “Voco”' Kesh, releasing his first solo album titled, Cristo Redentor in 1968, which included his extra-terrestrial version of “Wade in the Water,” still a classic to this day. Then the news arrived that Harvey Mandel had replaced Henry Vestine as lead guitarist of Canned Heat, and it was clear that his talents had been noticed by more than just a few musicians. After several tours and 3 albums with the Heat, he was recruited by British blues man John Mayall to be a member of the Bluesbreakers. In 1971 Mandel resumed his solo career, releasing several more albums including Baby Batter & The Snake.

One of Mandel’s most significant session credits was his participation on The Rolling Stones’ 1976 LP Black and Blue. His unique style is evident on the song “Hot Stuff.” When Mick Taylor left the Stones at the end of 1974, Jagger & Co. auditioned various guitarists, among them Mandel and the man who eventually got the job, Ronnie Wood. Following his success with the Stones, he became a busy session player with groups such as Love and The Ventures, and opened for Jeff Beck on his Canadian tour as part of a power trio with Jimmy Haslip, of the Yellowjackets. He relocated to Chicago in the late ‘70s and continued to tour extensively as well as supporting groups such as Roxy Music. Throughout the next 3 decades, Mandel has earned copious praises for both his solo work and his collaborative efforts becoming one of the most influential and best known guitar players of his era. Now’s your chance to own a box set featuring the albums that started it all!