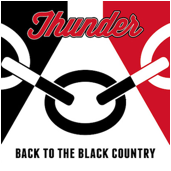 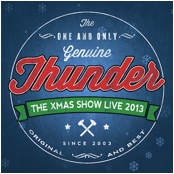 THUNDER return with the release of not just one, but 2 live albums: Back To The Black Country  (featuring additional highlights to the ticket buyer CD) and Thunder The Xmas Show Live 2013 both available now from www.thunderonline.com.    Recorded at the band’s thundering sold out Xmas Shows at Wolverhampton Civic Hall on 20th and 21st December.  The albums feature the highlights of the band’s biggest Christmas shows to date, together with the biggest band (including guest backing vocals, keyboards and a brass section).   To give fans a special treat one free download from each album is available now from the website.

Danny Bowes says:
“Here’s the thing. We decided to resurrect our Christmas show concept in 2011, after an incredible show at London’s High Voltage Festival that summer. Having been away for 2 years, it was really quite moving to see so many people wearing Thunder tee shirts in the crowd, all singing every word of our set. Since then we’ve not managed to get near a studio, but the Christmas shows have just got bigger and bigger, and nuttier and nuttier! Wolves Civic last December was quite simply off the scale, and the crowd was the noisiest we’ve ever played to. So having got the new year out of the way, and the recordings mixed, we were having a cup of tea and discussing what to do next, and then Live Nation called up and asked if we wanted to play on Clapham Common with Aerosmith and Joe Bonamassa. How are we going to turn that down? I keep saying I’m supposed to be retired, but nobody’s bloody listening…”

Back To The Black Country

Thunder will join the line-up at the Calling Festival on Clapham Common on Saturday 28th June with Aerosmith and Joe Bonamassa, plus Walking Papers and others to be confirmed… They will play a selection of their greatest hits and classic tracks, and everyone will jump up and down and scream very loudly. They say it’s the law..   Full details from