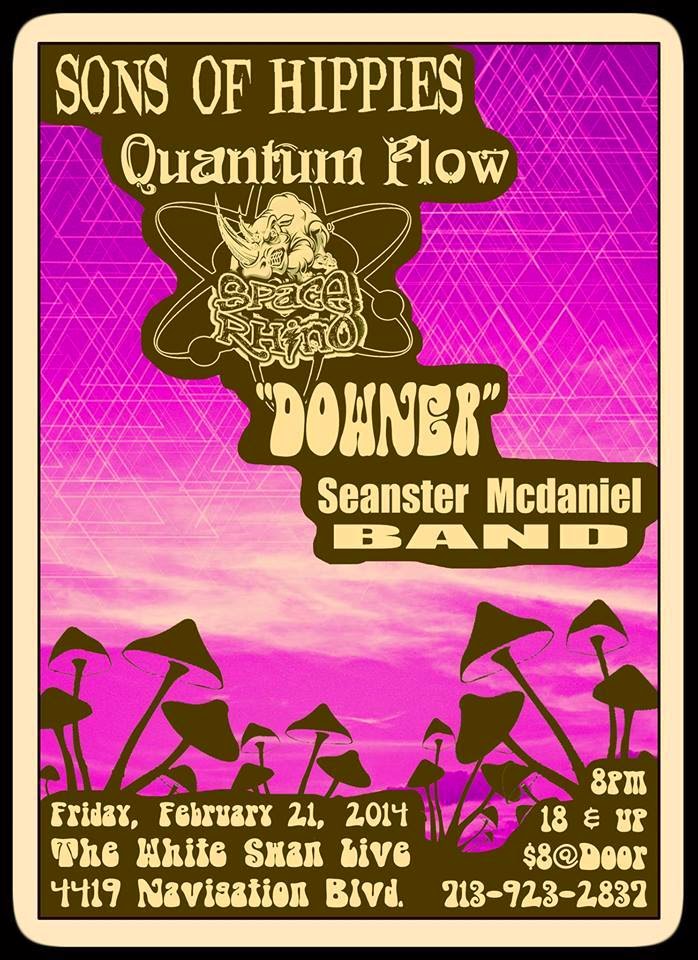 I'm a little late getting this one out there. Reason being a few days after the show, one of Houston's best medical surgeons, put yours truly on bed rest. Instructed to do as little as possible until surgery was arranged, in which he said would be as soon as possible. Paperwork takes time as we know, so just about two weeks later, I had a hernia operation.

Almost two weeks AFTER THAT, and I can report that I'm just kind of getting around to where I could say I'm starting to feel the benefits of the surgery. At first, all I felt was the pain one gets from getting themselves cut open at several locations. Oh yeah, plus the nausea from the drugs they put you to sleep with. Out Patient Surgery – I was home a mere few hours after the procedure. My lovely Sandra braving Houston highways safely getting me home, and on the mend. Everyday better feelin' somewhat then the day before. I put aside the pain pills eight days after. Not that it still don't hurt. Having a few bad habits in my past, I learned over the decades that I had best self police myself when necessary. Nowadays I consume pharmaceuticals like Vicodin, only when completely necessary. The pill did as it was designed to do, and that's to minimize the severity of the pain. In my case, what was felt after being opened up (microscopic surgery) and having my insides rearranged back into what I hope to be, perfect working order. The pain killers one imagines needing after surviving that procedure can in some cases, be too easy to abuse. Explains why something like Vicodin can be purchased on the streets of Houston for about three dollars a pop. Makes it a road one should proceed down with caution. 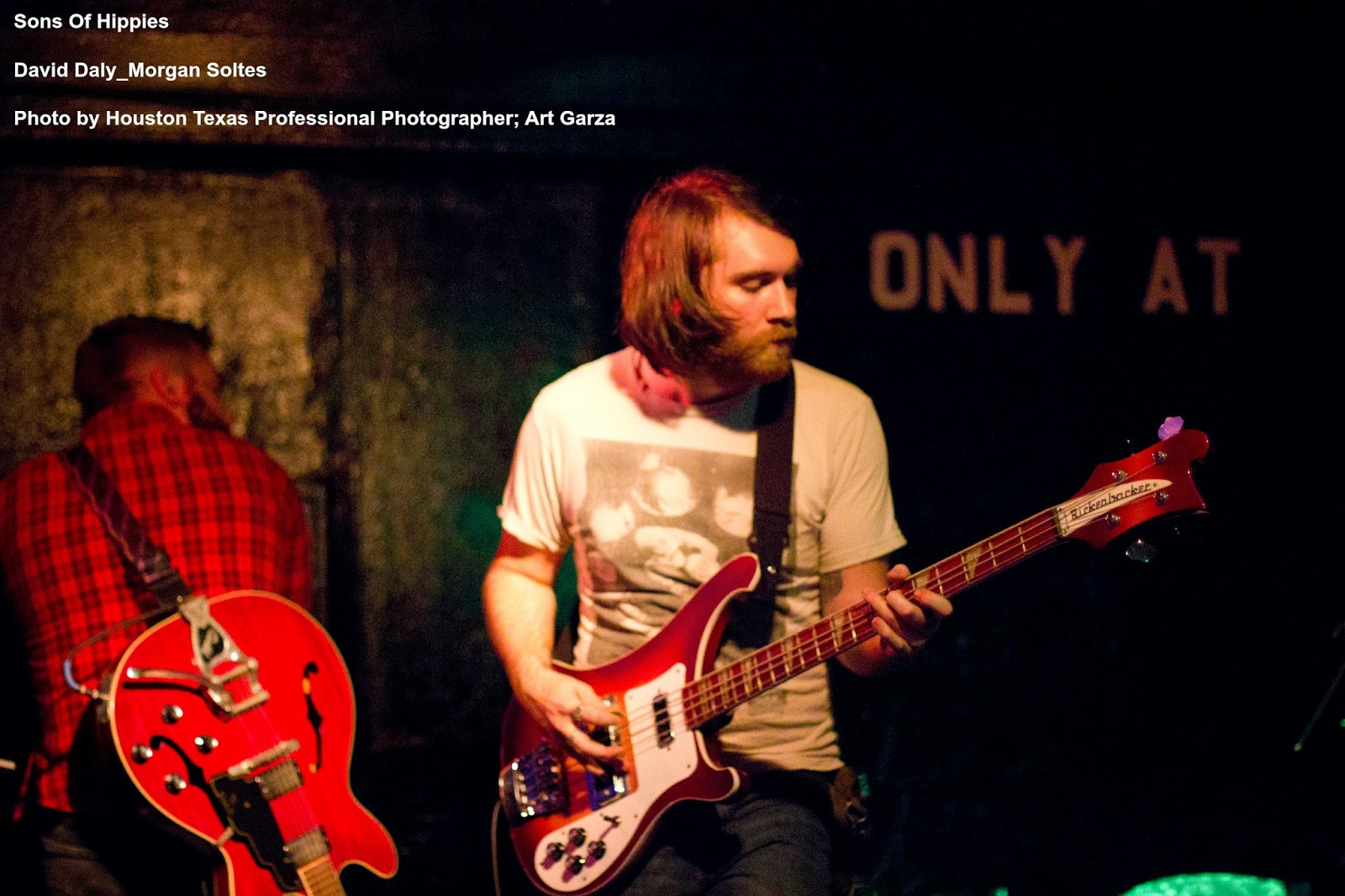 Really, the ONLY thing to give me trouble the night Sons Of Hippies made their Houston debut, was my belly. The otherwise innie belly button I was born with in Winterhaven Florida all those full moons ago, now looking more like an outie. A beer stomach that was never earned. Explains the extra large tee-shirts I'm always wearing. The umbilical hernia, about a decade in the making. Maybe I should have gotten it taken care of earlier? Now that I had the procedure, my belly has gone down a tad, and the continual pain I was having the last month or so before getting the hernia taken care of, has subsided. So the cool Sons Of Hippies tee-shirt I purchased at the show, will look even better on me, the more into recovery I am. I also got a bumper sticker off the SOH merchandise table that reads; “Sons Of Hippies Stole My Drugs.” Damn those Sons Of Hippies I tell myself every time now I pass that sticker. Displayed at home within our music collection, along with another sticker which is a shelf away by our movie DVDs that reads; “I Love Tromaville High.” OH...and I almost forgot. I got a pack of blotter art also from the SOH merchandise table. Coolest shit you ever want to see. Everything reasonably priced by the way. 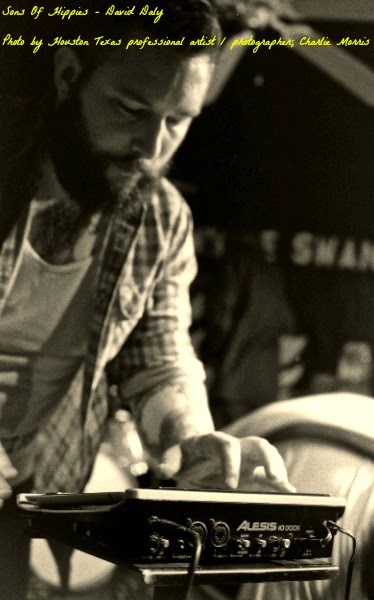 So, how cool is it when a musician or band you want to see play live, headlines the evenings festivities playing last on the bill that including them, consists of FOUR bands? Not that cool at all you say? Been there, done that, got the overly priced tee-shirt. I know...believe me I know. Anything more then an opening act, can wear concert attendees patience. It's happened to me before going to see Ozzy or Dream Theater. Time itself usually drags because the bands playing before the headliner, most times suck thru a long ass straw, and are just riding on the coattails of the headliner, for fame and lunch money. This time around at the White Swan Live on a Friday night, music wise it WASN'T so bad. My favorite out of the three acts that played before Sons Of Hippies was the opening act; Seanster McDaniel Band. The music was good, and the stage banter interesting. I wish them well in their further endeavors, as I also do the two other bands that played that evening. 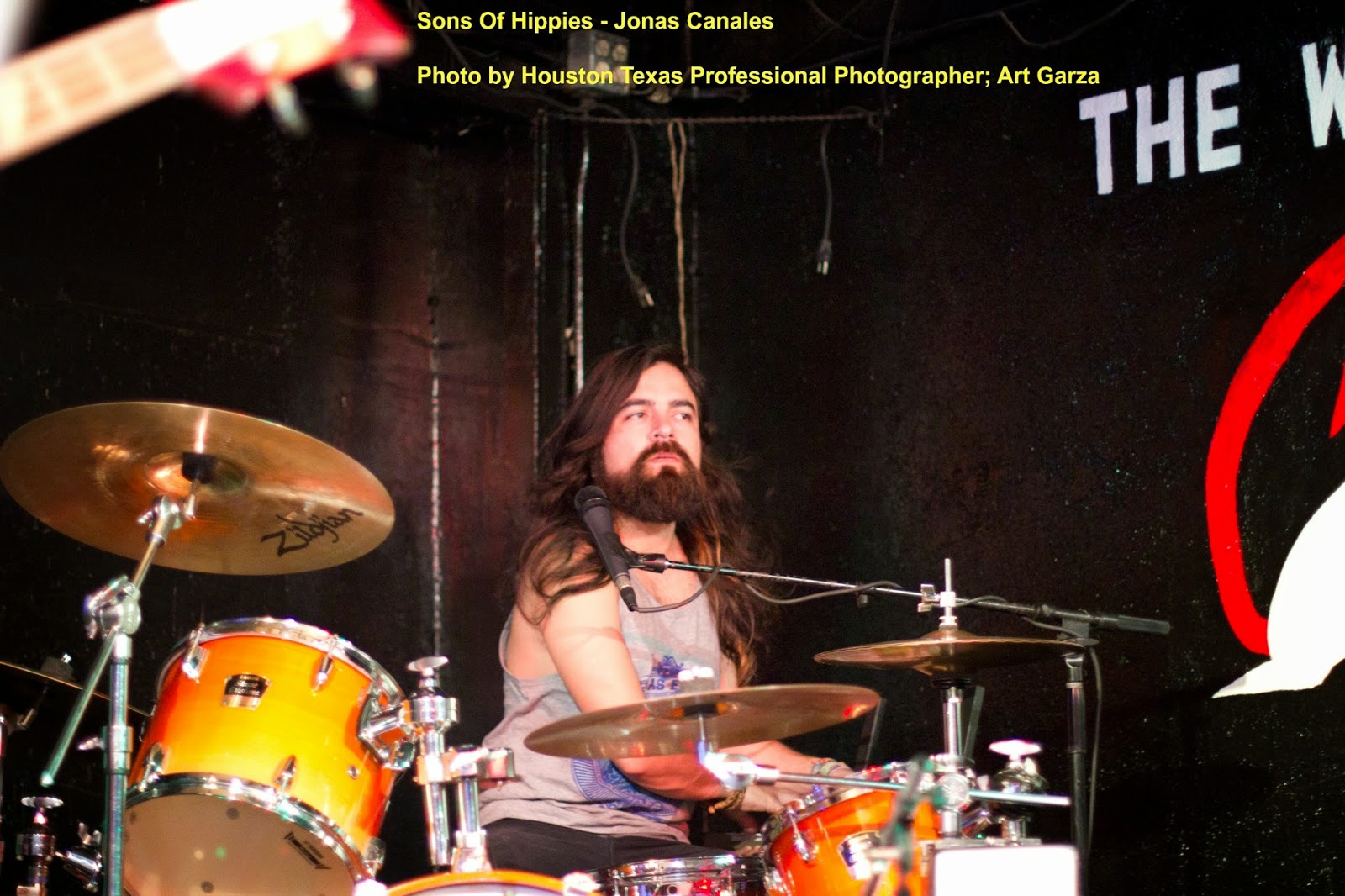 My second time seeing Sons Of Hippies in concert. My first time as a four piece band. Since July of 2013, when my lovely wife and myself saw them play in Fort Worth Texas, and now, they added a bass player; Morgan Soltes. Something the bands been wanting to do, singer Katherine Kelly told me before the band took the stage. One reason, to expand and pick up on the keyboard parts guest musician Billy Sherwood played on their debut record with Cleopatra Records; Sons Of Hippies – Griffons At The Gates Of Heaven (2013). Besides that, a natural progression for the group. Next comes a trombone player...only kidding.
Once on stage, the band begins with the third track from their 'Griffons At The Gates Of Heaven' offering called 'Dark Daisies'. The beginning sounds capture those in attendance almost immediately. A cool opener for the Sons Of Hippies have not only taken the stage at The White Swan Live, they now commandeered it. 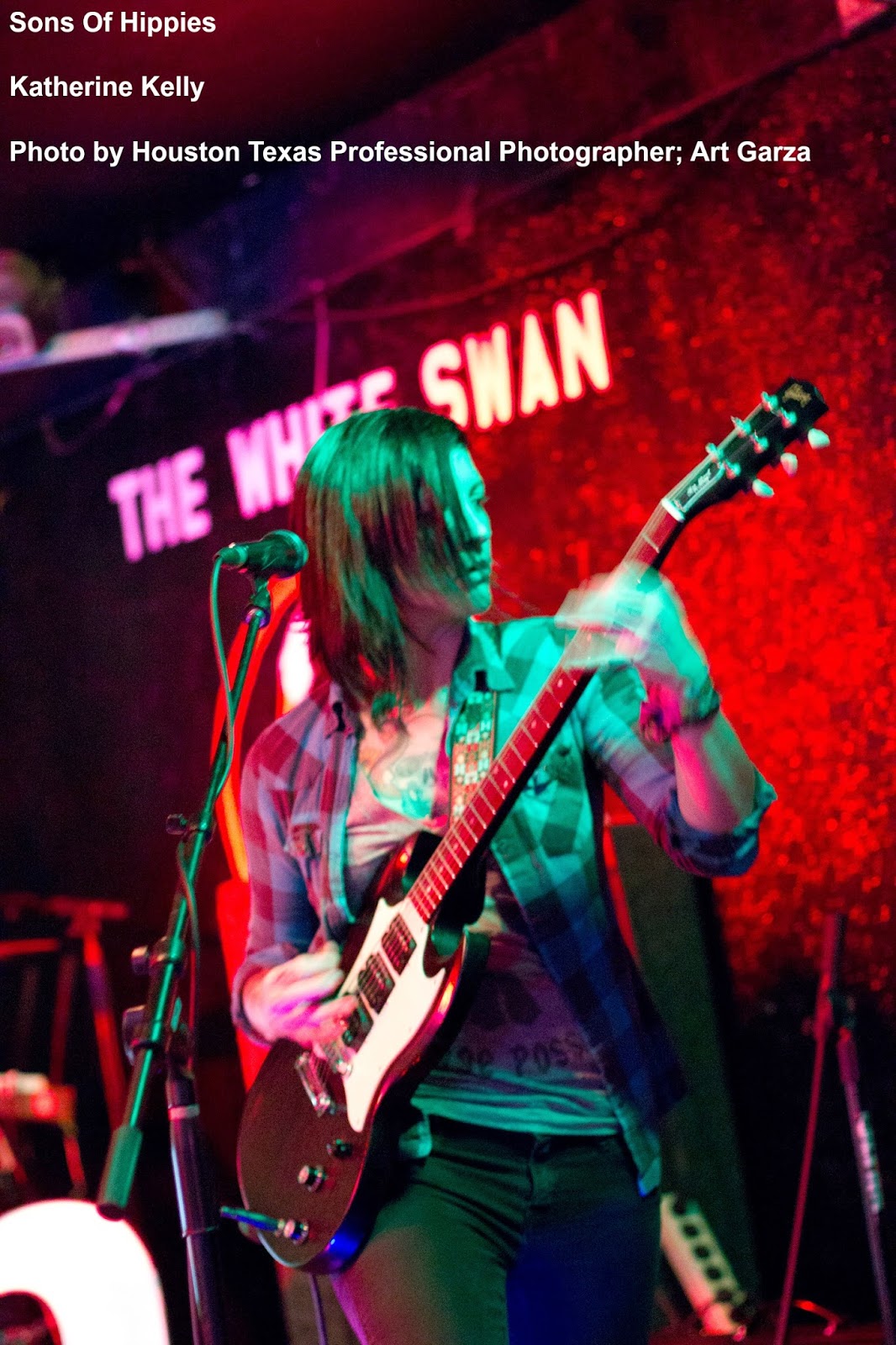 Within the crowd were a lot of musicians. From what I could tell all were paying close attention. As the Sons Of Hippies played on, I occasionally get a glance from one of them, like a sign of approval. An unspoken acknowledgment of sorts understanding my purpose for attending.
The Sons Of Hippies had it going on not only with their rocking audio, but their visuals as well. Center stage is a VERY cool, state of the art, visual display. Imagine this...O being the base drum of the coolest drum set you ever want to see (if the bands visual presentation is considered part of the kit). The letters S & H on each side of drummer, and co-founder of the group; Jonas Canales. One looking at the stage while the band rocks sees TV screens in the shape of letters. A twenty-first century special effects projection unit. An upgrade from the 1960's psychedelic artwork / projections one would see at the acid rock shows of time gone by. Shown along with the music, the combination of the two is very hypnotic, especially if having a slight buzz. Be warned...try to look all around and not just focus on the cool imagery. Not only are SOH outstanding musicians, but very good performers as well. Acting wise, SOH have a few videos to their ever growing catalog of eye and ear candy. Uncle G recommends you (the reader) checking them out, if you have not done so already. Then you can make your friends HIP, by sharing / turning them on. Shows you care (ready it does).

Sons Of Hippies – The White Swan Live – Houston Texas live debut (21 Feb 2014)
Dark Daises / Blood And Wine / Spaceship Ride / Minute x Minute / Omni / Fire / Man Or Moon / Jet Black Vipers / Blood In The Water / Mirrorball / High Plains Drifters.
The set seemed over so fast. A sign as to how good it was. Billy Sherwood who saw the band at The Viper Room sometime after the Houston gig said on his official Facebook page recently;

“Katherine is really fun to watch...they rocked”.
I totally agree with Mr Sherwood (ex-Yes / Cirra:) when it comes to assessing the performance I just witnessed; Sons Of Hippies – besides just Ms. Katherine, rocked indeed !! A cool modern day Psychedelic rock band that I'm certain will reach great heights in the music world as long as they stay on track, and remain focused on where it is they want to go. After hanging with them some, I can say I seriously believe all four members, are truly dedicated to spreading joy and cheer where ever they may wonder (for hippies are inclined to do just that, and being children of hippies it certainly makes sense that they would do the same).

Sons Of Hippies reminds me of another band, back in the 1990's. Madonna's label Maverick signed them. A friend and myself got their debut CD, and stayed part of their fan base ever since. Every new studio...new tour...they get more popular. Now they play in stadiums. The band I am referring to is; Muse. SONS OF HIPPIES display the same energy – different grooves – they share some of the same vibes. If not already on your music radar, they need to be.
I want to THANK the two Houston professional photographers I had with me; Mr. Art Garza (color digital), and Mr. Charlie Morris (black and white film). All photos taken were spectacular. The ones included with this story, just a few. Still, should give the reader of this review, a sense of being there with me. Easily done with photographs shot as well as these.
T
HANKS to The White Swan Live in Houston Texas for booking Sons Of Hippies. Enjoyed myself while there, and welcome the opportunity to spend another evening hanging out. Cool clientele, and the ones running the joint could not be any nicer.

Cool Sons Of Hippies Trivia: John Wesley (brilliant musician / solo artist mostly known for his association with Porcupine Tree) gets official credit for discovering Sons Of Hippies, and bringing them to the attention of Cleopatra Records.