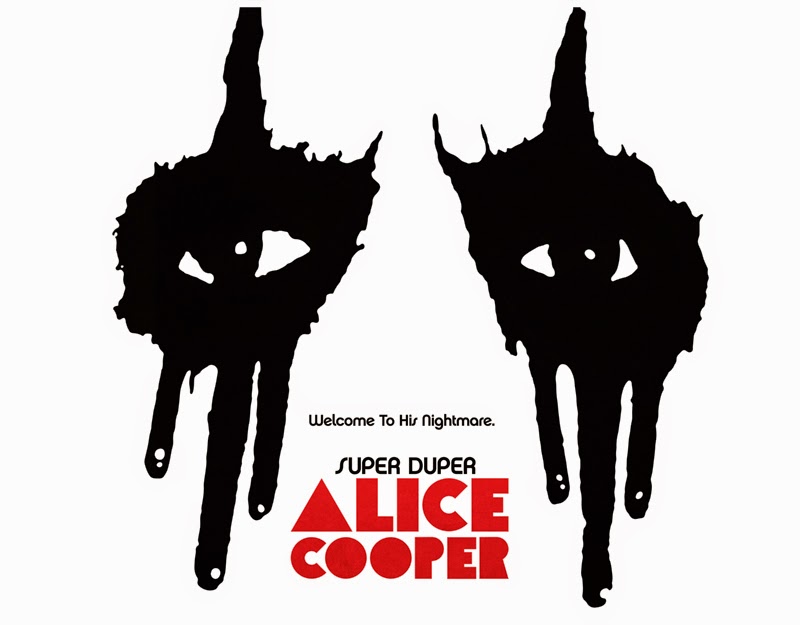 On the evening of April 30th, I attended a special screening of a documentary film on singer and showman, Vincent Furnier. Whose that you say? Not a name that would draw many people. So it makes sense, Vince is better known as Alice Cooper. Lead vocalist in a shock rock band that had major success back in the 1970's. Songs like 'I'm Eighteen', and 'School's Out' propelling them to major fame. Long story short, money and popularity put a wedge between the rest of the band and Vince. Lives were altered. Glen Buxton, lead guitarist for the group, would pass away less than twenty five years after the disbandment at age 49. A causality of what some considered a well calculated business move, for if anyone deserved the name of Alice Cooper, it was certainly the one closest associated: Vince. The other four guys moved on to the best of their abilities. At the end of the documentary, we are informed original drummer for Alice Cooper, Neal Smith, is now the 'Rockin' Realtor'. I love the way it was presented...best commercial EVER!! And original bass player for Alice Cooper, Dennis Dunaway, we're told is still rocking out himself. Has a group called Blue Coupe that he sometimes (and this blew me away) every now and then warm up for the rock band Dennis helped create. Such a treat I imagine. More important is that his teen friendship with his good old pal Vince was rekindled. Made me kind of weepy there in the movie theater, myself and a dozen strangers all engrossed in what was unfolding before us on the big screen. Vincent Furnier...this is your life.

For those wondering why this was special, not the documentary itself but the screening I was attending, it's because Super Duper Alice Cooper is more along the lines of a made for DVD production. So it's not a typical theatrical rock n' roll movie / documentary one would fine at the local movie theater. You know...something with Martin Scorsese directing.

]Super Duper Alice Cooper is courtesy of Eagle Rock Entertainment. I LOVE this company!! Usually whatever they issue is always top-notch and very entertaining. The presentation of Super Duper Alice Cooper falls along those lines as well. At times it's a fancy slide show. I'm amazed at the things you can do with old photos nowadays. Special effects made some photos appear almost three dimensional. Really enhanced and very telling. Like they say, a picture is worth a thousand words. The entire documentary being made of photos complemented by video footage, and not a line of talking heads you would see appear, for with Super Duper Alice Cooper, it's stars and guest stars are just doing narration. You never actually see Vince / Alice on screen as he is today, at age 66 years old reflecting back on his career. Not in the documentary. We did in the movie theater. It all started with Alice appearing on screen to introduce the film. And at the very end after the credits roll by, he appeared again to answer a handful of questions (asked in advance I imagine) and then closed out the evening.

Now I got some bones to pick. The part where it's said Frank Zappa recorded them while showing a floating joint around his image, implied they all participated in the smoking of the reefer and that's how Alice Cooper's first album, Pretties For You, was made. I'm watching this thinking to myself if this was truly correct. Well, for one I don't believe Frank Zappa was a stoner. I have nothing against cannabis personally, but I always read Frank was not into weed. He associated it with illegal drugs. To his credit, the man was a serious musician. Playing with him, one had to read music. Now according to Michael Bruce's autobiography, No More Mr. Nice Guy – The Inside Story of Alice Cooper, Frank Zappa took ill and had Ian Underwood mainly do the producing. Michael states Herb Cohen helped as well. As for the pot smoking, Mr. Bruce, who by the way is an original member of Alice Cooper himself, reports that one day Frank caught the band smoking weed in the studio bathroom and told them to get out and go smoke in the alley. This sounds like more of the Frank Zappa I learned about over the decades.

Since I brought up the name Michael Bruce, here is bone-picking number two. The rhythm guitarist, keyboardist, and MAIN SONGWRITER is mentioned NOWHERE in this documentary. You see his image start appearing in pictures and video clips and then as he suddenly appeared, once the story gets to a certain point, he DISAPPEARS. Other BIG original Alice Cooper songs that fans most identify Michael with are tunes like 'Be My Lover', and 'No More Mr. Nice Guy', were not even mentioned, let alone played in the film. No focus, no spotlight, no mention of whatever became of Michael Bruce like was mentioned with Dennis and Neal. No mention either of Glen Buxton passing away. Neal Smith once said if there was no Glen Buxton, there would have never been an Alice Cooper. Both musicians were reasons for Vince being able to play celebrity in the first place. If it not for Buxton's opening riffs for 'School's Out', would Vince have ever appeared on The Snoop Sisters or The Muppets? If not for the songs of Michael Bruce, would Alice's first solo, Welcome To My Nightmare, have been so popular?
Most of the documentary is about Vince and his days with the original band. Alice's solo career starting with 1975's Nightmare goes by pretty fast.

One thing mentioned in this documentary and not in previous documentaries was Alice's cocaine addiction in the late 1970's and early 1980's. Erases any and all previous comments about Alice ONLY being a booze hound. Able to beat yet another hardcore addiction, as if alcohol wasn't hard enough. Unfortunately, this reviewer knows first hand. I had the DTs when I quit drinking alcoholically, back in '86. Personally, I've been there, done that, and got the tee shirt. Freebasing cocaine made my chest hurt. I found I was better off just shooting the drug, right in my veins. A much more direct delivery system. In 1986, I quit that as well. Took me a full two years to mentally get over doing cocaine, and be able to go on with my life without it bothering me. Those are seriously hard things to kick. According to this new documentary, it's reported that Alice has been able to achieve being clean and sober over three decades now. I know from battling my own demons, that's an HUGE accomplishment. Alice Cooper in 2014 with his playing golf and Christian lifestyle is a role model for rockers everywhere. Everyday that goes by Alice proves one can be a professional musician / entertainer without always having to maintain a buzz.

Rating: Using the one to ten star rating system, Uncle G gives the new Eagle Rock Entertainment documentary, Super Duper Alice Cooper - SIX STARS. A little better than average. One thing I didn't like was how Shep Gordon came across at one point, somewhat like a prick. Around the time of the group's break-up, subsequent solo records, and band members discussing taking a year off. Between chasing success, and becoming successful, those that made up Alice Cooper by the year 1974, been steadily at this for a few years now. Drummer Neal Smith hinted at Gordon's attitude / response as being threatening.

Personally I find it hard to believe management had the other four band member’s best interest at heart after the Muscle Of Love album. It's a theory I was even able to debate some years back with the late Brian 'Renfield' Nelson. He was Alice's personal assistant for a long time. We would get into these heated conversations held within the Alice Cooper Internet Community. Towards the end of the 1990's and the beginning of the new century, the dude seemed like he was always online. One thing Renfield told me was that he believed Alice Cooper's break up was all business, and nothing personal. That's a nice way of summing it up. Nowadays Mr. Gordon is mostly retired and living in Hawaii. And for the record, Glen Buxton has been buried in Iowa since 1997. It's publicly known the man had his demons, and that his addictions led to his early demise. Fame...a serious lack of ability as to how to handle it, and then going through the embarrassment of it all being taken away, in my opinion, contributing factors to an early death as well.

Note: I believe Eagle Rocks Entertainment Super Duper Alice Cooper is coming out on DVD next month (June).
Source: Book -No More Mr. Nice Guy – The Inside Story of Alice Cooper by Michael Bruce with Billy James (out of print...try eBay). 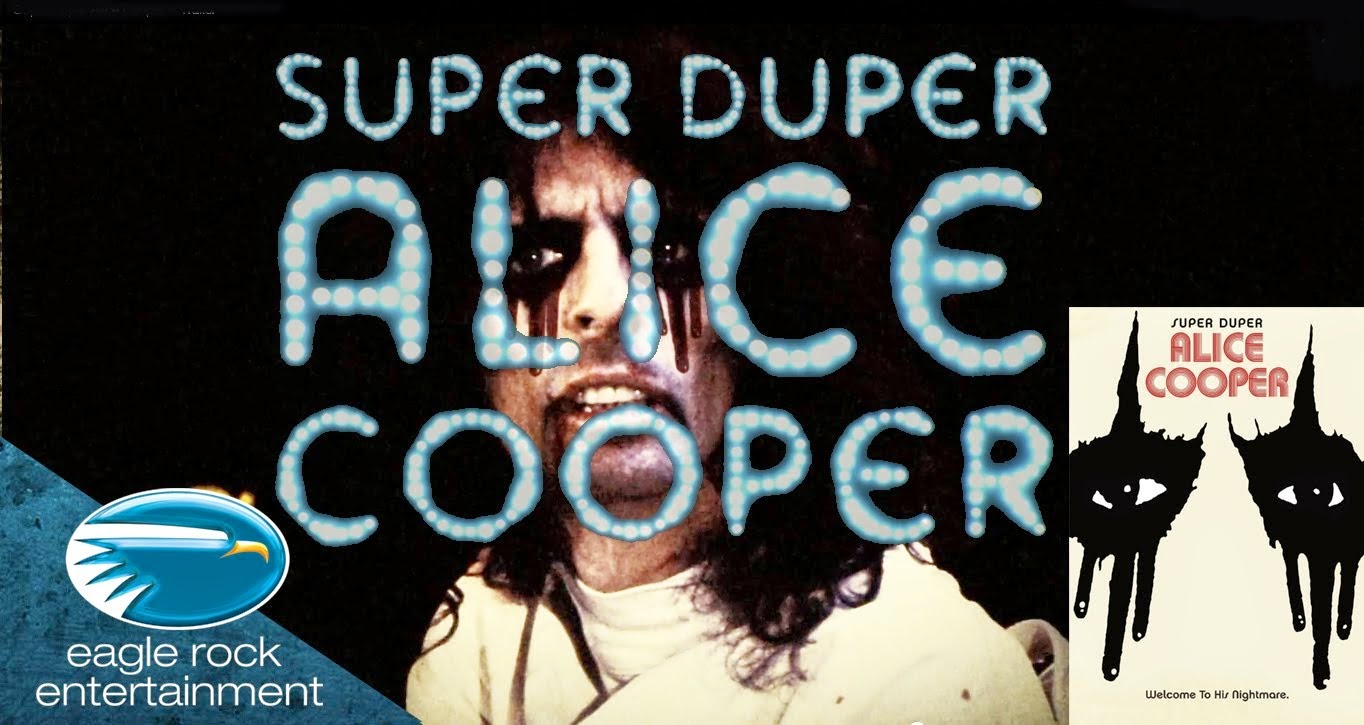