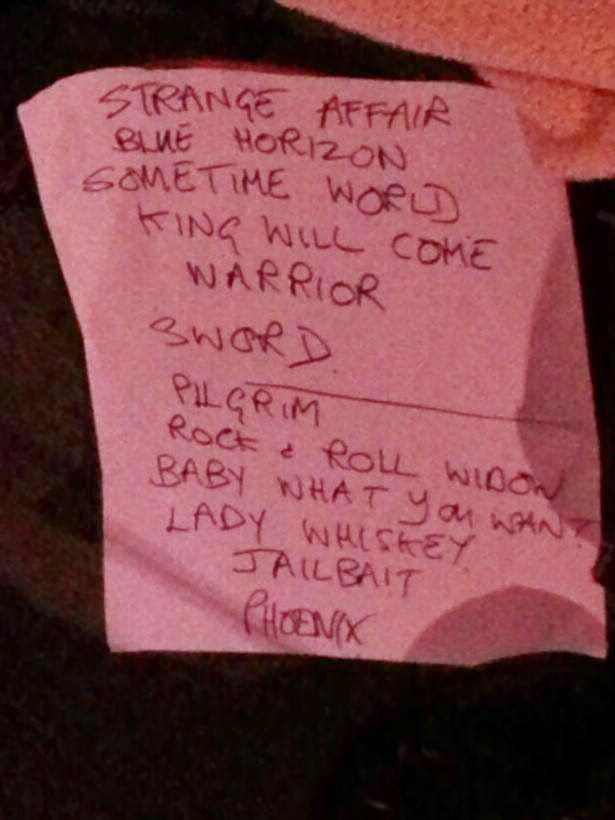 Flying over the endless seas into America, driving hours upon hours through the desert and mountain passes, Wishbone Ash made it to my neck of the woods, Jazzbones in Tacoma, Washington on May 9th and played to a very grateful crowd of fans!

“Are you ready to rock?” Andy Powell asks after he takes his position front and center on the stage holding his 1967 Gibson V. As we were shouting …YEAH, the band broke into “Strange Affair,” a rockin’ appetizer. What I liked right away was the sound level of the music. It wasn’t so loud that I couldn’t hear each instrument or Andy Powell’s mellifluous voice, a key part of Wishbone Ash’s sound. They did turn it up just a bit, but the sound quality remained excellent!

Wishbone Ash is known as a prog band, but they are a very guitar driven band with two lead guitar players, whom are very different in a lot of ways yet, each one is the same in that they support and compliment each other. On second guitar is Jyrki “Muddy” Mannenin a very skilled guitarist heavily influenced by the great Rory Gallagher. Amongst his talents at harmonizing and soloing, is his slide guitar.

Wishbone Ash played “Blue Horizon” off of their new album. Keeping with the band’s known style and sophistication, this song is filled with melodic guitar hooks and is so well written musically and lyrically. They performed this quite equally to the studio version and is one of my favorites.

It’s a pleasure to watch Wishbone Ash work together.  Each song connects the players to each other in different ways.  In “Pilgrim” an instrumental off of their second album, Bob Skeat (bass) and Andy Powell (rhythm) harmonized while Muddy Mannenin  played a soaring passage into the song.  Joe Crabtree (drums) kept it vibrant with beats and symbols until they all join together in a brilliant driving force.  The lock-In between Bob Skeat and Joe Crabtree is amazing as they are totally in tune with each other.

The last song they played before the encore was a fantastic sixteen minute version of “Pheonix” off of their self titled debut album released in 1970.  Not many lyrics to this song, but lots of guitar style and techniques, not to mention all the different genres they incorporated into it, blues, rock, jazz, and reggae.  Brilliant solo’s aside, Andy Powell has this knack of making unique sounds with his guitar.

There is only one Wishbone Ash and they proved that the other night playing a setlist that went back from 1970 all the way up to ’Blue Horizon,’ their brand new album.  Andy Powell has been around for a long time and I got to witness, first hand the passion for music and creativity that still burns within him.  There is much more to come from Wishbone Ash! In the meantime check out the bands latest album Blue Horizon which still finds Wishbone Ash a vital and alive band pushing the boundaries of guitar based rock forward. Something they have been doing for more than forty years. For proof of that check out the band on their forthcoming tour dates (Live Dates Below)

All live photos by:
Scott Banning
Posted by Anonymous at 14:13