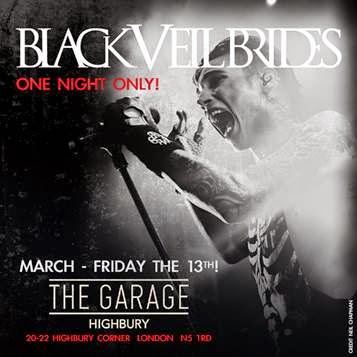 Black Veil Brides have announced their most intimate ever London show at The Garage on Friday the 13th March 2015.  Tickets for this show will go on sale on Wednesday 29th October @ 9am and are sure to sell out very quickly! Tickets are priced at £25 and will be available from the following website: http://www.livenation.co.uk/artist/black-veil-brides-tickets

The album is also available via iTunes athttp://po.st/BVB5

The new album was produced by studio-legend Bob Rock, known for producing some of rock’s most successful albums including Metallica’s Black Album and Motley Crüe’s Dr. Feelgood.

Black Veil Brides have recently completed a UK tour in support of their new album - The Black Mass 2014 headline tour kicked off on October 3rd in Cardiff and ran through to mid-October. The trek made stops in London, Glasgow and  Manchester to name a few before it wrapped up on October 17th in Leeds.  The band are currently on the US leg of The Black Mass headline tour  with support coming from Falling In Reverse, Set It Off and Drama Club.

Black Veil Brides have been continually building momentum and expanding their ever-growing “BVB Army” since the release of their first album We Stitch These Wounds. The debut song “Knives And Pens” has been viewed over 100 million times on YouTube. The band has also released the critically-acclaimed albums Set The World On Fire and Wretched And Divine: The Story Of The Wild Ones respectively. Their last release landed at #7 on the Billboard 200 selling over 42,000 copies its first week and soared to the #1 Spot on the iTunes Top Album Chart and the iTunes Rock Chart.  Black Veil Brides recently won an award at the inaugural Alternative Press Music Award in Cleveland for Most Dedicated Fans. This award goes alongside their numerous Kerrang awards and three Revolver Golden God Awards.