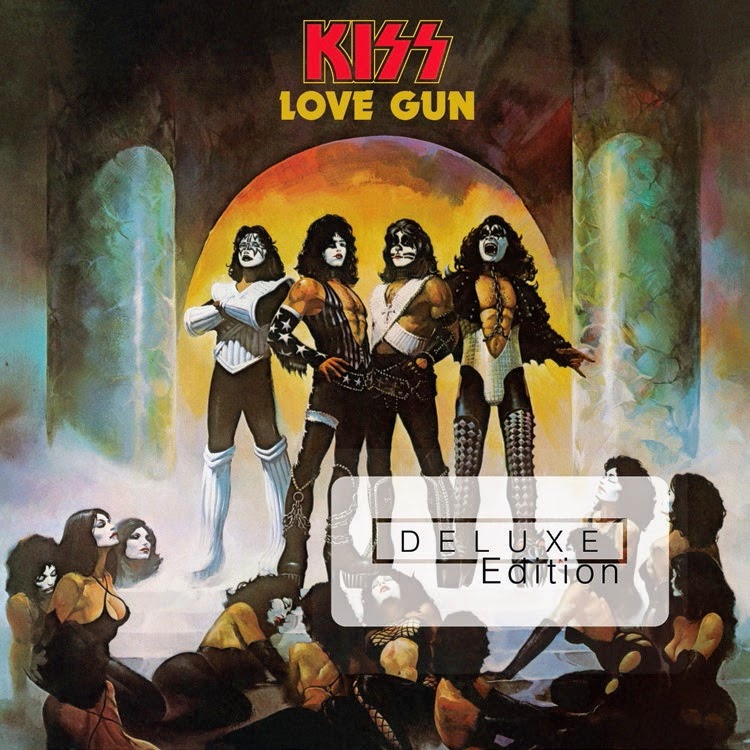 The two-CD edition will include the complete re-mastered first album, featuring such classics as the title track, “Plaster Caster”, the song inspired by Cynthia Plaster Caster, the groupie famous for taking casts of rock star genitalia; “Shock Me”, written about Ace Frehley suffering an electric shock during a concert in Lakeland, Florida;  “Christine Sixteen”, and “Then She Kissed Me”, the band’s cheeky, gender-switching cover of the Crystals’ 1963 hit penned by Jeff Barry, Ellie Greenwich and Phil Spector.

The second disc is made up of rare, never released Love Gun demos of “Plaster Caster”, “Tomorrow and Tonight” and “Much Too Soon”.  The first four lines of the demo “I Know Who You Are” eventually evolved and became the song “Living In Sin” and the rest of the lyrics and music became “I Know Who You Are”. A glimpse into Paul Stanley’s creative process is demonstrated in “Love Gun (Teaching Demo)” with Stanley talking through the various chords of the song after writing the song.  The next version “Love Gun (Demo)” is the complete demo performance.  “Reputation”, the only previously released demo, was originally included on this year’s KISS 40 compilation.

Also included is a 1977  interview with Gene Simmons, as well as three never-available live tracks from their show at the Capitol Centre, Landover, Maryland U.S.A. from December 20, 1977, “Love Gun”, “Christine Sixteen” and “Shock Me”. The package comes with liner notes especially written by Def Leppard’s Joe Elliott, currently on tour with KISS.

With the culmination of the KISS 40th Anniversary Tour,  KISS marks their four decades as America’s most iconic band with their first-ever residency, KISS Rocks Vegas, at The Joint inside Hard Rock Hotel & Casino, a series of nine performances, starting Wednesday, Nov. 5 through Sunday, Nov. 23, including shows on Nov. 7, 8, 12, 14, 15, 19 and 22. KISS will make waves with one of the loudest, most over-the-top, non-stop parties ever at The Joint, unleashing its signature elaborate set designs, jam-packed set list, intense pyrotechnics and much more.

Gene Simmons and Paul Stanley also star in 4th and Loud, the new primetime docu-series from AMC, which chronicles the first season of the Arena Football League team L.A. KISS.
About KISS:
Forty years ago KISS released their eponymous debut album, which would propel the band to the top of the rock and roll hierarchy where they have reigned for the past four decades making the KISS legacy a global brand.

KISS remains one of the most influential bands in the history of rock and roll.  As one of America's top gold-record champions, KISS has released 44 albums and sold more than 100 million albums worldwide. Decades of record-breaking tours around the globe have included high-profile appearances at Super Bowl XXXIII, the Winter Olympics in Salt Lake City, the Rockin' The Corps concert dedicated to our troops in Iraq and Afghanistan, special guest appearance on the 2009 American Idol finale that boasted 30 million viewers and a 2010 Dr. Pepper Super Bowl commercial and advertising campaign in support of their Hottest Show On Earth tour.
Gene Simmons and Paul Stanley, with longtime members guitarist Tommy Thayer and drummer Eric Singer, are stronger than ever with a legacy that continues to grow, generation after generation. Their last album, Monster, proved that they are still at the top of their game with impressive sales and topping the charts worldwide debuting at No. 3 in the U.S. on the Billboard 200 best-selling albums chart and Top 10 in twenty other countries. The unparalleled devotion and loyalty of the KISS Army to the "Hottest Band in the World" is a striking testament to the band's unbreakable bond with its fans.

This year KISS celebrates two major milestones, their induction into the Rock and Roll Hall of Fame as well as the band's 40th Anniversary and in true KISS fashion, the band is making 2014 the biggest and loudest, non-stop rock and roll party of the century.