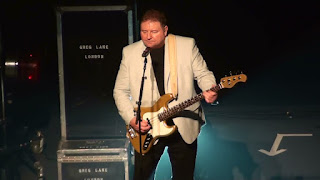 Greg Lake, tours the UK and Europe in “Songs of a Lifetime”, a shared musical journey full of drama and laughter  which critics hail as an “artistic triumph” and fans say is the “experience of a lifetime”

August 14, 2012 - Legendary singer and songwriter Greg Lake tours the UK and Europe in Songs of a Lifetime, a shared musical journey and performance experience, which received rave reviews from fans and critics alike in North America. The tour begins this November 2012 in the UK.

Hailed as an "artistic triumph" and "the experience of a lifetime", Songs of a Lifetime gives new insight into Greg Lake and his influences, while showcasing the influence his writing and voice have had not only for rock and roll, but contemporary music of all types.

Greg Lake has long been considered a legendary voice and musical powerhouse whose impact changed the landscape of rock and roll. Many simply refer to him as “The Voice.” Visionary and creative, Songs of a Lifetime provides an evocative, emotional ride into the life and music of one of the world’s most popular songwriters in a unique format which relies on audience involvement as well as the artistry of the performer.

The tour gives theatre goers the opportunity to hear songs written by Lake and others from Emerson, Lake & Palmer, King Crimson, the Beatles, Curtis Mayfield, Elvis, and more reimagined and reinterpreted for the stage. Audience members are encouraged to ask questions and share musical memories. The customized design allows for a different and personal experience for the audience and artist every night, featuring stories of Lake’s encounters with other musical greats who influenced him as well as shared memories created from what Greg calls “the shared journey” he has with the audience which allows the gift of music to “move from soul to soul and spirit to spirit.”

“The concept of performing an intimate and autobiographical show presents a huge challenge,” Lake says. “The evolution of the experience is so invigorating it still gives me a thrill every time I think about it. The task is to develop an event that is memorable and unique, unexpected and impactful. I want to defy expectations and defy what people expect when they hear the words ‘one man show’. I am pleased to say that we have been successful in stepping up to that challenge to create an experiential show that is as much an event as it is a performance.”

“We create an intimate and unusual event together,” he adds. “However, at the end of the night the most important [thing] of all is that everyone feels entertained and enriched by the whole live experience.”

More surprises are ahead for fans and each show is both exciting and different. Lake has taken care to explode expectations of the ordinary to create something extraordinary.

“This is not a boring show, with me just strumming folk songs,” Greg promises. "It is a highly produced show with lots of drama and pathos,” he continues. “Everyone feels part of something indescribable, remarkable and enlightening, as well as having been entertained by shared memories of our musical journeys together.”

The UK and European legs of the tour follow a successful North American run, with rave reviews by audience members and critics alike.

"If you love music, you will love this show. I've never felt so much part of what is happening."

"Greg Lake's music is the music of my life. I can't believe that I had the opportunity to speak with him, laugh with him, and to feel as if he and I were in his living room, good friends sharing good times."

"Greg Lake is so humble and moving. He speaks with deep respect and humility of his idols in rock and roll, while the audience regards him as the iconic equals of those he honours."

"It is an amazing show, not to be missed. I've seen it all and thought I heard it all, but if you love music, if you love rock and roll, you want to be part of this."

The tour coincides with the upcoming release of Greg Lake’s autobiography, Lucky Man, and was inspired by it, but the two are not the same.

The autobiography is NOT an audio recording of the show, but a narrative of Lake’s experiences from childhood to the present, including never before revealed details, funny and poignant moments, and colorful facts of his amazing career as one of the world’s leading and influential musicians, songwriters, vocalists and poets. The autobiography will be released in three audio book volumes, read by the author. The first volume will be available at the show; the complete print edition is anticipated at the end of the year.

New editions of Greg Lake’s solo albums and DVDs are also expected to be made exclusively available to those fans in attendance.

Special VIP packages, which include sound check attendance, post-show interaction and photo opportunities, post-show receptions with the singer and signed merchandise, are available at www.greglake.com.

Greg Lake is managed by Stewart Young and the UK and European Dates are booked by World Concert Artists. corrado@worldconcertartists.org. More information can be found at www.greglake.com .

Check out the following montage of the show:
http://www.youtube.com/watch?v=QcxESo-TcBI&feature=youtu.be