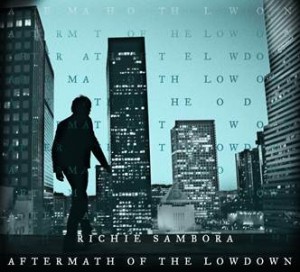 Richie Sambora Releases his third solo album Aftermath Of The Lowdown on September 18th. The album follows up Stranger In This Town (1991) and Undiscovered Soul(1998)

The Bon Jovi guitarist has taken 14 years to release his third solo album away from the band. The album is a personal one and lyrically tackles the universal tribulations of divorce, substance abuse, single parenthood, independence and self-reliance.
“A lot has happened in my life over the last ten years, personal stuff that’s cathartic for me to get out,” says Sambora.

“Really things that could happen to anybody, but I just happened to be in a band with the biggest concert tour in the world, and in the glare of the public eye.”