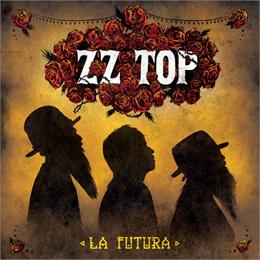 The first new studio album from ZZ Top in nine years is LA FUTURA, set for release September 11 by American Recordings. The album harks back to the hallmark raw sound of the band's formative years and will, inevitably, be considered a return to form on multiple levels. LA FUTURA, produced by Rick Rubin and Billy F Gibbons, the band’s guitarist/singer, finds the legendary group infusing the newly recorded work with the electric blues/roots approach that typified ZZ Top's earliest work while, at the same time, reaching for new sonic horizons. At its fundament, this is the incarnation of the band whose influence resonates today with such artists as The Black Keys, Jack White, Queens of the Stone Age and many others.

Now celebrating their 42nd year with the same line-up, Gibbons along with bassist/vocalist Dusty Hill and drummer Frank Beard have come up with ten tracks that reflect the band’s intuitive take on rock brought to new, sometimes surreal, plateaus. “We thought long and hard about what this album should be,” commented Gibbons. “We wanted to recall the directness of our early stuff but not turn our backs on contemporary technology. The result of this melding of the past and the present is, of course, LA FUTURA.”

The fact that the new album’s title is in Spanish is a nod to an early ZZ Top tradition manifested in the titles of some of the band’s earliest albums including Tres Hombres, Fandango!, El Loco and Degüello. Known for decades by the sobriquet “That Little Ol’ Band From Texas,” ZZ Top was inducted into the Rock and Roll Hall of Fame by Keith Richards in 2004 and has maintained a very active international and domestic touring schedule over the intervening years. They signed to American Recordings a few years ago and have been working on what would become LA FUTURA in spurts since then. Last year they finally entered Foam Box Recordings in Houston, working full time to lay down the tracks that would comprise LA FUTURA. Additional recording for the album took place at Shangri La Studios in Malibu, CA.

The four songs that kick off LA FUTURA, “I Gotsta Get Paid,” “Chartreuse,” “Consumption” and “Over You” debuted last month as Texicali, a digital preview collection exclusively available from iTunes that achieved significant critical and sales success. “I Gotsta Get Paid,” performed by the band in video spots for the Jeremiah Weed line of beverages raised awareness of the song that was inspired by the 1990’s underground Houston rap song “25 Lighters” by DJ DMD with Lil’ Keke and Fat Pat. USA Today named "“I Gotsta Get Paid” its top pick of the week, citing the band for unleashing "its trademark grit and grease in a raw, bluesy rough-and-tumble treatment..." No Depression called "Consumption" "a grinding groove with a bit of Texan funk squeezed into the grooves." Music Radar analyzed "Consumption," noting, "The groove is fat, crunchy and full of swagger," summing the effort us as "ZZ Top crankin' up some fresh, vital roadhouse blues."

Also part of LA FUTURA is, fittingly, “Flyin’ High.” The track made its interstellar debut when it was piped into the Soyuz spacecraft at the time of its launch to the International Space Station thirteen months ago. Before it was fully completed, the song was heard onboard at the request of NASA Astronaut Mike Fossum, a long-time ZZ Top fan and intimate who had caught wind of it in an earlier conversation with Dusty Hill.

LA FUTURA also includes “I Don’t Wanna Lose, Lose, You” that has a real garage rock feel while “Big Shiny Nine” is a double entendre tour de force. “It’s Too Easy Mañana” is a down tempo lament, written by Gillian Welch and David Rawlings, whose chorus includes the lyric “it’s too easy to feel good.” “Heartache In Blue” includes vocals shared by Gibbons and Hill and can be likened to country blues as reimagined for the 21st Century. The album closes with “Have A Little Mercy,” a down and dirty funky tune, complete with tempo shift, that should serve to underscore the ZZ Top motto that “you just can’t lose with the blues.”
The band will embark on a string of U.S. dates, highlighted by a rare New York appearance at The Beacon Theatre the day after the release of LA FUTURA. A major multi-tiered marketing campaign will coincide with the release of LA FUTURA, bringing the good news that, at long last, there’s a new ZZ Top album to the nation and the world.