Yardbirds Boxed Set: "Glimpses" A Must have For Fans 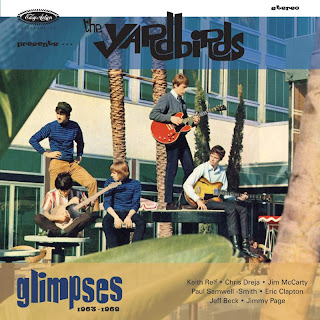 As everyone knows the Yardbirds were one of the most influential bands ever to come out of the UK. They spawned three of the world's greatest guitar heroes in Eric Clapton, Jeff Beck and Jimmy Page. This Boxed set is the final word on the band, jam packed full of rarities sessions and outtakes. It is an amazing package. If you are a rock fan you really need this boxed set in your collection.

Five years in compiling this amazing set of recordings of the Yardbirds live in concert or taken from broadcasts of various sources around the globe.
Some tracks never previously heard, most are unreleased
Licensed from the Yardbirds, EMI, BBC
In depth notes by original compiler and author of Yardbirds book: Greg Russo
Unseen and rare photos included in the booklet

The first 3000 copies of this package will include a 7" single of I wish you would / Baby whats wrong ? both produced by Mike Vernon over the winter of 1963 Dec '63 & Jan '64 to be precise ) at RG Jones studio in Morden Surrey England .

Buy It Here:
http://www.easyaction.co.uk/index.php/artists/product/21-yardbirds-glimpses-1963-1968-rarities-cd-box-set
Posted by Jon Kirkman at 14:45