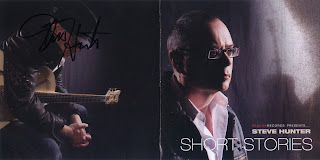 I started getting into Steve Hunter's work back in the 1970's. Over the years, he has become one of my favorite rock guitarists. A maestro really, he's capable of much more than just your average, everyday guitar player. Excels in any style played. Definitely a player you want to hear more from, once you hear Steve play for the first time.

If you like extraordinary guitar players, then Hunter's your guy. Once hooked, like I was after having played Alice Cooper's 'Welcome To My Nightmare' a hundred or more times, then that's it. From there, you expand your knowledge of Hunter's work. Then it's like you can't get enough. Steve Hunter can play the hardest of any electric guitar player out there nowadays. Can rock with the best of them. Turn that around and he can play the most beautiful music that any six string instrument can muster. Experienced, and at the top of his game. It's one incredible guitar solo after another. Dude's on his game always.


My introduction to Steve Hunter was Alice Cooper. Steve was in Alice's original solo band. Had worked with the Coopers previously. Worked with Bob Ezrin. In the beginning, himself and Dick Wagner were on guitar duty. One of the best double guitarist team to come down the pike. They had to be. The previous double guitar team Alice worked with, original members of Alice Cooper, Michael Bruce and Glen Buxton, were extraordinary at the job they did. Anything less than that, and it would not have worked as well as it did. Together, they helped launch Alice into his new solo career.

Before and after the Cooper hookup, Hunter's worked with other musicians; Mitch Ryder, Lou Reed, Jack Bruce, Dr. John, Peter Gabriel, David Lee Roth, and Bette Midler, just to name a few. The last one may surprise you. In 1979 a film came out that was widely popular; The Rose. Look at the musician credits, and you'll spot Steve's name.

One more I'll mention is a legendary star of stage and TV; Mr. Glen Campbell. Steve had the honor to appear on Glen's 61st studio album release, 2011's 'Ghost On A Canvas'. So you see, Hunter really has worked with a lot of fine musicians / groups over the years. Has played on a long list of hit classic rock songs including one of my favorite Peter Gabriel songs; Solsbury Hill.

Short Stories is the first solo album / CD that I heard of Mr. Hunter's. I knew before playing it, that the CD was an instrumental. So right off the bat, it got my attention. I have always loved the instrumental format / segments in songs. Lyrics is its own art form. To me what matters most is the actual music. Don't get me wrong. Add words to most tunes and that's when it becomes memorable. Believe it or not, there are and always has been musical compositions that are better off without a vocalist(s) and words getting in the way. Such is the case here with Steve Hunter's 2008 CD, Short Stories. The song titles offering clues as to what the musician could be visualizing with each composition. Besides that, it's the guitar and its various styles of being played that Steve lets narrate with each well-crafted piece that makes up this CD. Steve's wife Karen is listed in the credits for vocalization on one of the harder rockin' songs; PeaceWork. Awesome tune !! Reminds me of Jeff Beck some. If one had to be compared to someone, a very high honor would be to have you name even mentioned in the same sentence as, Mr. Jeff Beck.

Every sound you hear on Short Stories is credited to Steve; drums, bass, the whole nine yards. A multi-instrumentalist in every sense of the word. Short Stories, a product as good as any rock player goes serious musician, has yet to conjure up. Their are some awesome instrumental rock albums out there that center around the guitar. This is another one. The Grammy Award for Best Rock Instrumental Performance for 2008 could have been for any song on this release. I'm guessing they never heard it.

I remember my first listen to this CD like it was yesterday. Actually, was only a couple weeks or so before writing this, that I first acquired the CD. Here's how it happened. A couple / few weeks ago (as I already said) I was listening to Alice Cooper's latest studio offering; Welcome To My Nightmare 2. Steve's playing is all over this. Produced by Bob Ezrin. The whole CD has a great sound, and Steve plays some really hot licks on this. Motivated me when next online to do a Google search, and see what else Mr. Hunter has been up to lately. I knew he recently bowed out of the Cooper band to concentrate on making solo music. A tad more research and us fans find out there was also an additional reason; Steve's legally blind now. Suffers from pigmentary glaucoma. Keeps a diary on his official website; My Blind Blog. On a personal note, it's hard not to admire a guy whose capable of making lemonade, when life threw a curve ball and gave him lemons. People in the music / recording industry routinely throw praise at this man. My good friend...an honorary brother...Wil says Steve's; "a cool guy." Mr. Hunter recently stepped in for another cool guy, Glen Buxton, when Alice Cooper made it into the Rock N' Roll Hall of Fame. Buxton passed away. Hunter did an outstanding job representing him. Plus...Steve's just an all around exceptional guitar player / musician.

Back to my story and how I got Steve's CD; Short Stories. I purchased it on Hunter's official website. Came autographed too. Steve's musical abilities shine from the start of this CD, to the very last note at the end. Encompasses several different styles of playing, so not to bore the listener. I think he did that just to show off. Regardless, it's a fantastic offering. What I loved most while playing this on my home stereo really loud was Steve did me the favor and didn't forget how someone like myself became a fan. The man plays a mean rock guitar all throughout this. My only critique of the whole CD is that a couple songs could have been longer. Ends suddenly, where as I felt he was in such a good groove that the tune could have carried on a bit longer. If that's my only problem, then I don't have a problem. What I have is a desire to listen to another one of Steve's solo works.

I mentioned Steve's website already. If you have not checked it out in a while, please do so now. Well...not immediately right this second. Please finish reading this first. On the website you can learn and celebrate all of Steve's accomplishments in rock n' roll. Not only that, but you can tag along and experience him and his quest to go forward. New music for the year 2012, is right around the corner. Bookmark and please help support. Buy a song...buy a whole CD worth of songs. Mr. Hunter's an independent musician nowadays. Like everyone else, man's got to pay the bills. Take it from Uncle G, it's money well spent. I have played Steve's Short Stories repeatedly since it's arrival in my mailbox. In the house and in the car. I even brought it to work with me. Worth every penny I paid for it. Good reactions when friends come over and I have it playing on the stereo. Short Stories has already in this short time become a personal favorite of mine. Damn shame it took me four years to discover it. Don't be the same way. Remember and bookmark Mr. Hunter's website. And stay abreast. You'll be glad you did.