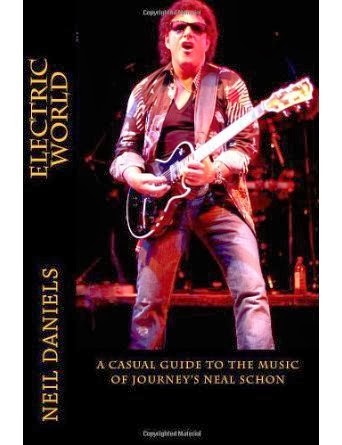 ELECTRIC WORLD - A CASUAL GUIDE TO THE MUSIC OF JOURNEY'S NEAL
SCHON
BY NEIL DANIELS
PUBLISHED BY CREATESPACE
OUT NOW IN THE UK AND USA
ISBN: 978-1494710644
“He's the most underrated guitarist to ever strap on a [guitar]. His touch could be the
subtle nuisance of everything he does when he plays.”
- Herbie Herbert, former Journey manager

Neal Schon is undoubtedly one of rock music's most versatile yet infuriatingly underrated guitarists. His work in the legendary multi-million selling AOR band Journey is universally known but what about his excellent solo albums and his other projects such as Bad English, HSAS, Hardline and Soul SirkUs, and not forgetting his many collaborations with the likes of Sammy Hagar, Paul Rodgers and Jan Hammer?

From the author of the acclaimed Don't Stop Believin' – The Untold Story Of Journey, Electric World – A Casual Guide To The Music O fJourney's Neal Schon is the first book to exclusively explore the music of the longest running member of one of the most successful American AOR bands of all time.

Electric World includes a foreword by Robert Fleischman, the original frontman of Journey, and exclusive interviews with such melodic rock heroes as Marco Mendoza, Jeff Scott Soto, Danny Vaughn, Glen Burtnik, Jimi Jamison and Ricky Phillips as well as a number of highly revered producers who have worked with Neal Schon such as Richie Zito and Mike Fraser. Also included are previously unpublished photos. Electric World is essential reading for Journey fans and AOR enthusiasts. Electric World – A Casual Guide To The Music Of Journey's Neal Schon is a 6x9 344 page paperback and eBook.
Posted by Jon Kirkman at 15:30